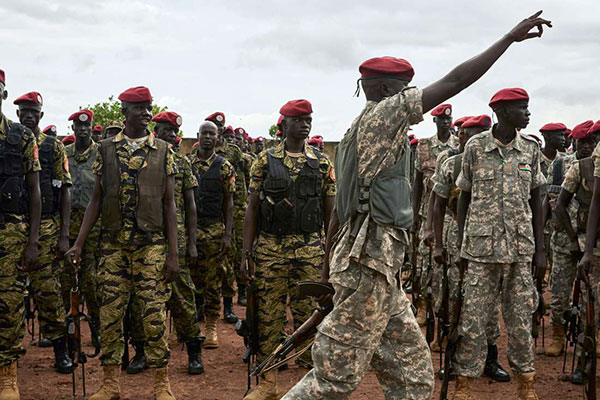 Puok Both Baluang, SPLM-IO Director for Public Relations and Communication said it is almost two years since the formation of the revitalized transitional unity government, and yet the parties have not concluded graduation of the 83,000 unified forces.

“It is almost one year and 6 months but we do not see much change except the ceasefire that is holding in the country, until now there is no progress for the graduation of (unified) forces,” Baluang told Juba Echo in an interview in Juba.

President Salva Kiir during his independence address on July 9, promised the graduation of the first batch of 53,000 forces, but this remains to happen, a few months to 2022.

The delay in implementing the security arrangement was one of the grievances of the breakaway SPLM/A-IO faction led by Machar’s former chief of staff Gen.Simon Gatwech Dual.

The group has since declared hostilities towards Machar’s supporters leading to violent clashes in Upper Nile State, since August that have left over 60 soldiers killed on both sides.

Baluang disclosed that SPLM-IO is committed to implement the peace agreement, noting that parties including the president (Kiir) need to speed up implementation of the security arrangement in letter and spirit.

“We do not support any war in the country, people should not return back to war. We believe there is no need to shed blood and make people die,” he said.

According to peace monitors (RJMEC) several SPLA-IO soldiers and other opposition troops have been deserting cantonment sites over the past years and months due to lack of food, medicines, clean water and shelter.

This creates dilemma and challenge for the parties implementing the fragile peace deal, as it means they may be unable to graduate the number of unified forces required.