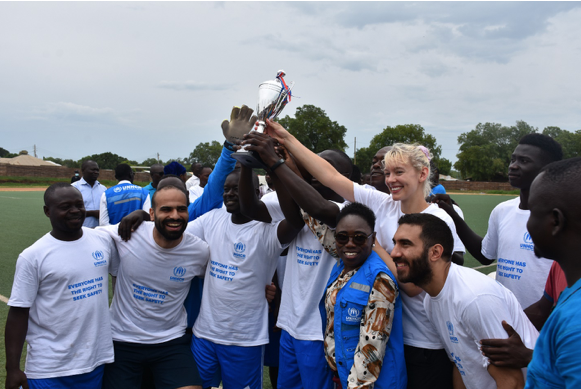 UNHCR came from behind to equalize in the last five minutes of the game to send the game to spot-kick. Issa Nizigiyimana, UNHCR’s goalkeeper, saved three penalties to win against refugees in a game played in Juba. The match ended 3-1 in favour of UNHCR after the normal time of 1-1 and the goalkeeper was credited by the fans for his outstanding performance.

Speaking shortly after the match, Nizigiyimana expressed his gratitude to the organizers of the game between the refugees and UNHCR for their effort to bring refugees from different parts of the country together for such sports events.

He said the game made him believe that, although he had some good months out of football, he could still play football.

He stated that he left football because he realized that football in his country was only for fans and not for earning money to support his family.

“Of course, I am from a family where everyone has to struggle in order to put something on the table, so I thought that some of us need to move on somewhere if we are to change our family lifestyle.

“That is how I found my way to South Sudan in 2013 and here I am, but I really tell you, I can still play good football if there is a chance for me to have delayed training, “Mr. Nizigiyimana revealed.

Meanwhile, Joseph Martin Dibamona, one of the oldest players in the refugee team, stated that it was a nice time for him to play football after he fled Congo some seven years back.

Mr Dibamona, the Congolese refugee in South Sudan, was forced to leave his country (Congo) for South Sudan due to conflict in his country, especially his tribes, being targeted by former President Joseph Kabila.

“I am happy to play with these young boys, and I wish such competition would change people’s hearts to give peace a chance to enable these youths to continue practising their talents,” he said.

He added that although his group lost the game, he believed that they were the winners, saying most importantly, the match gave them hope that things would still be better for them.

The match attracted a main audience around Juba, including top government officials headed by the country’s Minister of Youth and Sports, Dr Albino Bol Dhieu, and many other officials in the mix.