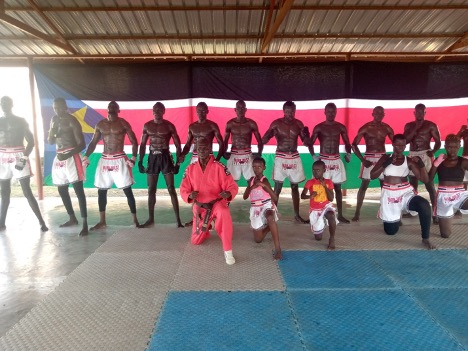 South Sudan Kick-boxing Federation president, Puro Okello has revealed that, they are prepared to fly to Cairo, Egypt, for the “African GAMMA Championship” game amidst financial crisis.

The Canadian-South Sudanese boxer will be joined by the Eastern African number one James Majok Gau, 70 kg, and Eddy Jadallah, 85 kgs for the Egypt trip to take part in the 2022 African “Global Association of Mixed Martial Arts (GAMMA) World Championships” happening for the first time in Africa.

Master Puro said last month that, his boxers may miss some of the major continental championships due to government failure to facilitate them to compete in the upcoming event.

“After months of requests for funds, the government has shown no interest in helping the boxers, although we are going to represent the country. “Master Puru cried out.

Puru told reporters that he is now going to use his own savings in order to fund the national boxing team, which will be competing in Cairo later this month although he wondered why the government failed to commit to its obligations of funding initiatives that would help young people to rebuild themselves.

“If I can do it, I will do it, but if not, then one day I will just pick up my bag and go to work somewhere I can be accepted and where I can make money.” he threatened.

The team president opined that he already paid for their flight with Taco Airlines and accommodation for the three of them without precisely declaring how much he paid in total.

He added that, for the two accompanying boxers to take part in the games, they are expected to pay membership fees, which he said, this is still a pending bill which he has to clear or else the gentlemen’s travel to Egypt become an unfulfilled dream.

It is worth mentioning that South Sudan is expected to compete in the WAKO Championship in South Africa and the World MauyThai Organization Continental Belt (WMO) tournament in Addis Ababa – Ethiopia and the players will want millions of pounds to participate in those games, which also include the 2014 Olympic Qualifiers.