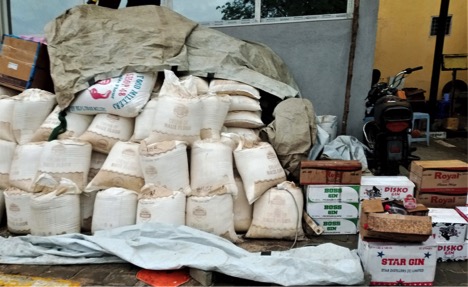 The deputy mayor of Juba city his worship Thiik -Thiik Maryadit has put forward that, there is a huge amount of expired food items in the local markets within Juba metropolitan according to the recently concluded inspection on goods and pharmaceutical products by Juba City council.

Addressing journalists on Friday during a press conference, the mayor said that some traders are repacking expired items in new cartons so that the unsuspicious buyers are not able to detect it apportioning blame to some government official for promoting this vice.

“There has been some resistance from the government because one of the expired wheat flour store belongs to an army general and he has been doing it for a very long time meaning, we are killing our own people, I want people to refrain from this kind of illicit business,” he warned.

The city mayor also dispensed orders outlawing alcoholic gin with red cap warning that anyone who will be found vending this product which also include Royal gin will be dealt with according to the law.

The deputy chief executive officer for Juba City Coucil Taban Charles, confirmed that they are encountering resistance from some top government officials who are involved in this unscrupulous ploy.

“Our team went for inspection and indeed we have discovered big quantity of expired maize flour but because somebody is more concerned about profit making than human safety, they repackage the expired flour,” Charles cries.

The deputy executive director also faulted line institution for protecting this “criminal” selling the expired goods because when they arrested the elements the institution levied severe pressure on them to set them free.   He added that they were also censured for conducting the inspection yet, this is their primary purpose adding that some employees of the local government do not understand their role and line of operation thereby interfering with other people’s roles.