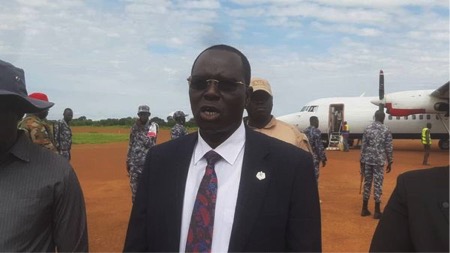 The Governor of Northern Bahr el Ghazal State Tong Akeen Ngor has on Monday appealed to the general public to support sporting activities in Aweil to promote unity and peaceful coexistence among the communities in the State.

“The State government will always support sports related activities with special attention given to football in order to create the spirit of peace and unity among the Young people,” he promised.

He appreciated the entire football fraternity of all counties within the state for their participation in the Provincial League 2022 aimed at promoting peace and unity in Northern Bahr El Ghazal State with the support of the State Ministry of Youth and Sports.

The governor revealed that backing up sporting activity is very crucial because that is why South Sudan Basketball team is now on top of group F with 17 points having beaten Congo and Egypt.

South Sudan basketball team which has suffered defeat in the hands of Senegal in the fourth window of World Cup qualifiers has booked a place in the  fifth and last round which will be in February next year in Abidjan Cod Ivor where Bright Star will have to play three games.

Only one victory will be enough for South Sudan to qualify for the world champions for the first time in history.