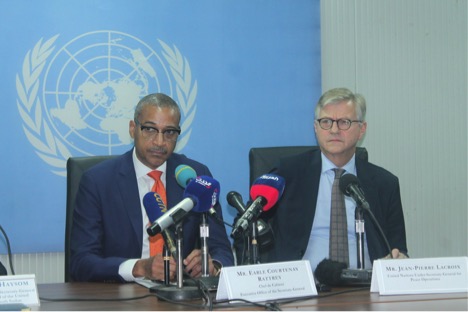 The United Nations Under-Secretary-General for Peace Operations, Jean-Pierre Lacroix has called for more support from the international community to help address the dire humanitarian crisis in South Sudan.

“One of the important goals of our visit is actually to try to convey back to New York the message to the UN system and most importantly the member states, including the donor community that it is important to keep the situation in South Sudan high on the international agenda,” Lacroix said at press conference held at UN headquarters in Juba on Wednesday.

The duo visited Jonglei state and other places where they interacted with political leaders, civil society representatives, and other key stakeholders in the peace process.

Lacroix said there is an expectation from the international community and partners involved with the United Nations to supporting South Sudan following recent progress in implementation of the 2018 revitalized peace agreement.

South Sudan’s transitional unity government made some progress in the security arrangements after graduation of nearly 40,000 unified forces.

Lacroix noted that he expects further progress in the political process and in the peace process.

He disclosed that crises in other parts of the world have shifted international focus away from South Sudan, and yet the youngest nation is experiencing at the same time many urgent humanitarian crises amid limited political and financial resources.

“There has to be the sense that there is a way forward, and that we are moving in the right direction towards achieving durable peace in South Sudan because we all know that the ultimate solution is political in South Sudan,” said Lacroix.

The latest Integrated Food Security Phase Classification (IPC) said almost 65 percent of the population, or 7.74 million people are severely food insecure with 2.9 million of those on the cusp of starvation and another 87,000 in famine-like conditions.

Rattray, the chef de cabinet said in the meetings they held with humanitarian agencies emphasis was put on the need to transition from resilience on humanitarian aid to development programing.

“We are aware that our mission takes place when humanitarian needs are on the rise, the figures that I have is that this year over a million are reported to be affected by these floods, people have told us that they are suffering not only due to conflict and the insecurity that I just mentioned but also because they can’t afford food or meet their basic needs,” said Battrey.

In addition, Lacroix emphasized the need for an all-inclusive political process in the country that includes women representatives, civil society and youth in the constitutional making process and electoral process.

South Sudan is expected to hold election in 2024 prior to end of the extended transition period in 2025.