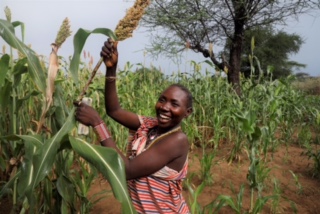 The Food and Agriculture Organization of the United Nations (FAO), United Nations International Children’s Emergency Fund (UNICEF) and the World Food Programme (WFP) said, that despite being dependent on food imports, South Sudan has enormous potential to produce food and become a ‘breadbasket’ of East Africa. But with continuing sub-national conflict that is forcing people to flee their homes and disrupting livelihoods, the country finds itself in a recurring food crisis.

“Ending hunger in South Sudan starts with ending sub-national conflict and tackling the climate crisis,” says, Adeyinka Badejo WFP Acting Country Director in South Sudan. “On this World Food Day, I call on all stakeholders to create conditions for peace and stability that will enable the country and its population to prosper, to increase food production, to curb the level of hunger that is spiralling out of control, and to build resilience to climatic shocks.”

Food insecurity in the country is alarming as hunger hit unprecedented levels this year with almost 65% of the population – 7.74 million people – severely food insecure with 2.9 million of those on the cusp of starvation and another 87,000 people in famine-like conditions.

WFP is reaching over five million people with food assistance while supporting close to fifty thousand to produce their crops by providing training in ‘climate smart’ agricultural techniques and modern agronomic practices.

FAO is providing emergency support to people in crises, through the distribution of seeds, tools and fishing kits, as well as providing training and access to climate information. FAO is also working with the government to strengthen every level of the food system, including production, post-harvest management, storage and marketing.

“FAO is supporting the formation of farming cooperatives and facilitating access to markets. Growth in the agricultural sector provides sustainable livelihoods, positively contributes to the national economy and helps reduce overdependence on imported foods,” added Malo.

“As the world is perpetually enveloped in climate-related, political and economic crises, we must double down on our efforts in South Sudan to address food insecurity,” said, Hamida Lasseko, UNICEF Representative in South Sudan. “Children pay the highest price and this is manifested in the alarming and increasing rates of severe wasting in children seen across the country. “

On the 16th of October, South Sudan joined the rest of the world to commemorate World Food Day under the theme Leave No One Behind. The main objective of the day is to increase public awareness of long-term global food challenges and to develop further national and international solidarity in the struggle against hunger, malnutrition and poverty. The national celebrations are taking place today 18 October  in Rumbek lakes state.