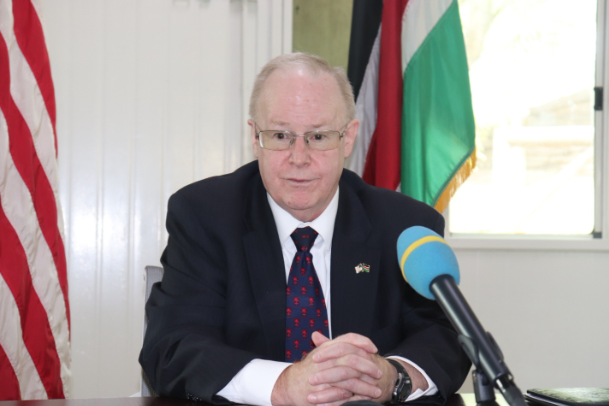 U.S envoy urges parties to speed up pending tasks as his tenure ends

The United States Envoy in South Sudan has called on the parties in the unity government to speed up
implementation of the critical pending tasks under the 2018 revitalized peace deal.
David Renz, the out-going U.S Chargé d’Affaires on Thursday reaffirmed his country’s commitment to
the peace process but urged parties to expedite implementation of remaining tasks such as unification
of forces and enacting the permanent constitution.
“My message as I leave is you (parties) redouble efforts and demonstrate to your people that you are
committed as you said you are,” Renz told journalists at the U.S Embassy in Juba.
The U.S together with other members of the influential Troika that includes Britain and Norway are key
guarantors of the ongoing peace process.
“You need to implement the peace agreement, whatever flaws it may have to remain the only path that
leaders and people of South Sudan have agreed to follow to bring about sustainable peace and
democratic changes that people want for this country,” Renz said.

As the end of the transitional period nears, President Salva Kiir and the opposition parties are yet to
graduate the first batch of 53,000 unified forces they promised earlier this year.
Despite the parties establishing the unified army command structure, nothing concrete has been
achieved on the unification of forces estimated to be 83,000 in total.
The process of enacting the permanent constitution, key Election Act and establishment of transitional
justice, accountability, healing and reconciliations mechanisms are also lagging behind schedule.