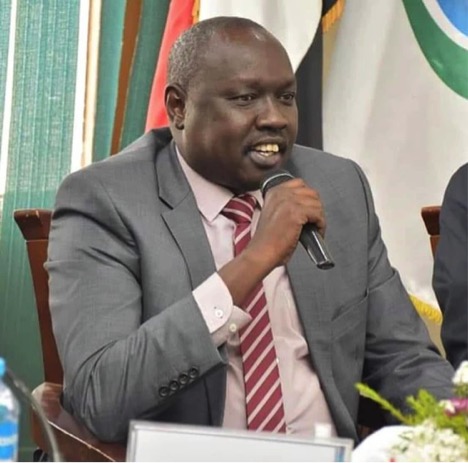 South Sudan’s Minister of Water Resources and Irrigation, Manawa Peter Gatkuoth has passed on in Cairo the capital of Egypt.

This was confirmed on Sunday by Dr. Riek Machar Teny, the First Vice President and Chairperson of the Suddan People’s Liberation Movement-In Opposition (SPLM-IO) which Gatkuoth subscribes to.

“In Cairo, he was diagnosed to have been suffering from high blood pressure that destroyed the main vein to his heart, stomach, and kidneys,” Machar said in a statement seen by The Juba Echo in Juba.

“Yesterday (Saturday) the doctors tried their best to replace the veins but he passed on at 5:00 A.M this morning of 19th June 2022,” it added.

Machar said preparations are underway for his body to be flown to Juba, adding that the burial arrangements will be communicated later on.

“According to the medical report which has not yet come, he had a blockage of the coronary artery, which supplies blood to the heart and the blockage has been found to have been caused by high blood pressure,” Michael Makuei Lueth, the minister of information said.

Makuei said that Gatkuoth died two days after he was flown to Egypt for treatment after complaining of persistent chest pain.

“He fell sick on Wednesday then he was taken to hospital and given medication, and then Thursday his situation deteriorated and he was medically referred to Egypt on Friday,” he added.

Gatkuoth was appointed minister in March 2020 in line with the 2018 revitalized peace agreement that came into effect on February 22, 2020.

Besides his ministerial position, Gatkouth was also the Chairman of the National Committee for Information and Public Relations, and also member of the SPLM-IO Political Bureau.