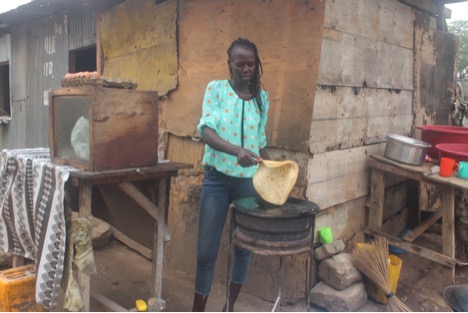 As South Sudan marked its 11th independence anniversary on Saturday, many of it’s nationals are now pinning hope on the 2018 revitalized peace deal to end years of conflicts and economic hardship.

Jackline Mami, a 30- year-old mother of three who runs an open restaurant within the University of Juba, said that the hope of a better country that many people like her had on independence eve in 2011 were dashed when the 2013 conflict broke out.

She told The Juba Echo that all her hope of a better future for her family rests on the successful implementation of the peace deal signed years ago to end conflict between the government and opposition fighters.

“I know that we have freedom compared to years back, but we still have other things still affecting us, especially us running businesses things are not going well we are independent but, in the market, we are not happy,” Mami said in Juba, the capital of South Sudan.

“Many of us cannot afford to purchase in the market because all goods in the market are very expensive,” she added while referring to the current surge in prices of food and fuel.

The recent surge in prices of basic commodities has seen the South Sudanese Pound (SSP) depreciate against the U.S dollar.

The SSP was previously exchanging at 43 with the dollar but this has risen to 57 in the black market.

“The ceasefire is holding and also security has improved compared to previous years. I hope for permanent peace from now onwards, we have to love ourselves as South Sudanese because we don’t wish to go back to war again,” Mami said.

Ayuong Ring Majok Jong, a 27- year- old student of economics at the University of Juba, said he hopes the economy will stabilize and be competitive in the region when the parties implement the critical pending tasks within the peace deal.

Ayuong Ring Majok Jong, a 27- year- old student of economics at the University of Juba at his business stall in Juba as South Sudan marked Independence Day on July 9.

“I am not happy with the slow peace implementation, many of our politicians are power hungry and corrupt and this is what is derailing the ongoing peace process,” he said.

Majok noted that the 83,000 unified forces have spent more than two years now without being graduated.

“This is worrying many people because it demonstrates that our leaders are not fully committed to implement the peace agreement,” he disclosed.

“I think our leaders are delaying implementation of the pending critical tasks because when they graduate the unified forces and complete other important tasks there will be elections,” Majok added.

President Kiir while addressing the nation on Thursday promised never to take his country back to war.

“All issues related to tribalism can easily be corrected, in places like Rwanda all people are identified not by their tribe but as Rwandans, but us in South Sudan we prefer to say I am a Murle, Zande by tribe, all people in South Sudan should be taken as South Sudanese,” Laat said.

“Our message to our leaders is that they should not take us back to war no matter what they are promising us, we need them to deliver services to the people,” Manyok said.

Edmund Yakani, the executive director of community empowerment for progress organization, noted some progress in terms of infrastructure development and improved security due to cessation of hostilities.

We have registered some progress in infrastructure development, you can now move from Juba to Bor safely by road but we still need our leaders to sort out their political differences and also work to stabilize the economy,” Yakani said.