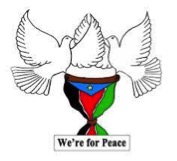 As the South Sudan peace agreement marks four years since it’s signing in 2018, several civilians have expressed mixed reactions after the recent extension of the transitional period by the parties.

Peter Mapour, a resident in the capital Juba on Monday expressed optimism on the peace process urging the parties to work extra hard to complete the pending critical issues before the February 2024 deadline.

“It is a good initiative from parties to the agreement in signing the roadmap for extension till February 2024. We need to have an election conducted fairly under the new reviewed permanent constitution,” Mapuor told The Juba Echo.

On August 4th, the parties agreed to extend the transitional period that was meant to elapse in February 2023.

The extension was done to allow the parties complete tasks such as graduation of the 83,000 unified forces and also complete the constitutional making-process.

‘I am happy for the ongoing road construction such as the Juba – Bhar El Ghazel highway and Juba-Bor highway,” he said.

Oyet Patrick, a journalist urged the transitional unity government to implement the pending tasks in letter and spirit.

Another journalist Ruot George who was once displaced hailed the government for providing security to allow internally displaced persons to return home.

“I have been enjoying peace by moving freely without fear. I had been part of the peace process through covering stories and holding seminars to train civil society organizations on how best to disseminate the peace agreement,” George said.

George revealed that the parties to the 2018 revitalized peace deal have now realized the benefit of peace.

“I think it is a time for our political parties to learn from mistakes in the past four years so that they could complete implementing the remaining benchmarks clearly laid down in the recent roadmap,” George said.

The 2018 peace deal remains the only path to permanent peace in the aftermath of renewed fighting in July 2016 that shattered the fragile 2015 peace deal.