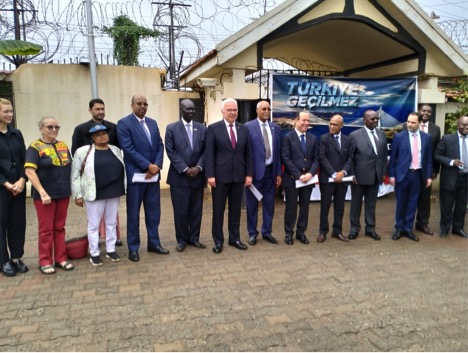 The Turkish Embassy in South Sudan has commemorated democracy and National unity Day on Thursday to mark the 6th anniversary of the failed coup attempt by Fethullahist Terrorist Organization (FETO) in Turkiye in July 2016.

“On the evening of July 15, 2016, the FETO launched a bloody coup attempt against the people and the government of my country, their aim was to establish a radical, fundamentalist regime, loyal only to their ringleader Fetullah Gulen” the Turkish Ambassador to South Sudan Erdem Mutaf said during the celebration in Juba.

He said,the coup attempt revealed a grave threat posed by the FETO terrorist organization against the State and away .

“This dark network worked through schools established over the last few decades, by brainwashing young minds at schools founded under the guise of so-called training activities, they indoctrinated large groups and radical followers, who carried out the instructions of the organization’s leadership unquestioningly and violated all legal and moral norms”. Continued the ambassador.

“As FETO affiliated army units left their barracks to OCCUPY key locations such as the Bosphorus Bridge in Istanbul using fighter jets and helicopters to bomb strategic targets including the Parliament, Presidential compound, army and police headquarters, thousands of civilians took to the streets to stop this unprecedented heinous act”

He said that the plotters killed 251 innocent civilians and left thousands injured. On that night the Turkish people defended democracy by sacrificing their lives in a heroic response which the conspirators did not foresee.

“In this respect, I would like to express our appreciation for the firm support and solidarity extended by H.E. Salva Kiir Mayardit after this coup attempt to our President H.E. Recep Tayyip Erdogan”

He said that Terrorism does not have a nationality, ethnicity or religion. This menace threatens humanity as a whole. Therefore, the response to this threat must be united and determined. No state has the luxury to differentiate between terrorists adding that no terrorist organization can be classified as “useful” according to preferences.

“I would like to stress and bring to your kind attention that FETO is present in around 160 countries today, with thousands of schools, businesses, NGOs and media houses. Their modus operandi is the same all around the world. As they aim to infiltrate and enlarge their global economic and political influence, they constitute a direct security threat for any country where they operate. We expect the international community to stand in solidarity with Turkey in the fight against terrorism”. He supplicates.

He said that the well-planned and wide-spread infiltration by FETO members and converts into the army, law enforcement, judiciary and numerous government institutions, made the coup attempt possible.