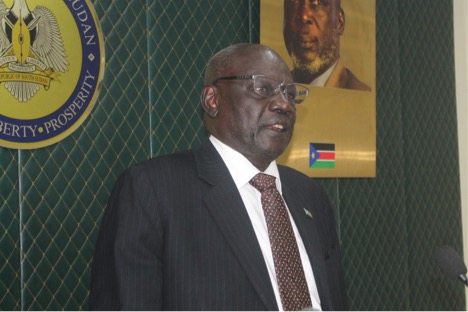 South Sudan’s government has approved 713,125,700 U.S dollars for the construction of the 392 kilometers Juba-Terekeka-Rumbek Road which is being constructed by a Chinese firm, Shandong Hi-Speed Group Co. Ltd (SDHS).

Michael Makuei Lueth, the Minister of Information and Broadcasting said the money will cover for construction of bridges, cross points, and compensation for members of the public affected during construction of the road that started since 2019.

“Upon thorough studies, the committee discovered that there were some items which were missing, bridges were missing, and crossing points were also missing including compensation for those who will be affected by the construction of the road,” Makuei told journalists after the weekly cabinet meeting in Juba, the capital of South Sudan on Friday.

SDHS already completed tarmacking of the 63 kilometer Juba-Terekeka section of the road and is currently working on the Terekeka-Rumbek stretch that will connect to the entire Bahr El Ghazal region.

Makuei expressed optimism of Shandong Hi-Speed completing the remaining section of Terekeka –Yirol-Rumbek that connects to Ramshel where the proposed capital is planned for construction by the government.

“The Juba-Terekeka section is already completed and it is being used now by the population and the clearance of the Terekeka-Yirol-Rumbek has started,” he trevealed.

In March 2019, SDHS was granted a contract by the government to start the construction of major roads.