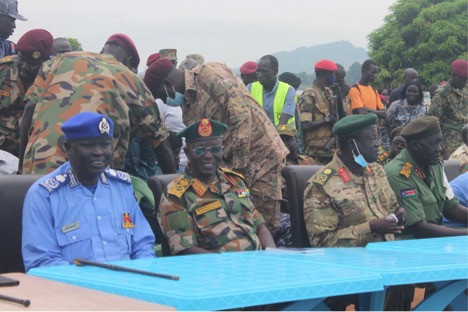 Soldiers told to report to training centers ahead of graduation

The heads of the various security mechanisms on Wednesday ordered soldiers who have deserted training sites in the past months to report back ahead of graduation slated for August 30th.

“The graduation will not delay this time around, this month will not end without graduation although there are a few challenges such as lack of boots and uniforms,” Gen. Santino Deng Wol, the Chief of Defense Force of the South Sudan People’s Defense Forces (SSPDF) at Rajaf training center on the outskirts of Juba, the capital.

The heads of the security team that attended the inspection at Rajaf included the Inspector General of Police Gen. Majak Akec Malok, and the Director of Internal Security Bureau Gen. Akol Koor Kuc.

“You are not party to any political party, you are not a party to SPLM nor SPLM-IO or SSOA. You are police officers for South Sudan,” he said.

Majak Akec Malok, the IGP urged those who deserted the training centers to return within two days for graduation.

“You have to tell some of your colleagues who are not present here today especially those in residential areas, in states, and other areas should return to Rajaf before two days,” Malok said.

Gen. Kuc, the Director of Internal Security Bureau, said the police and national security services will continue to work jointly to protect civilians with their properties.

“The work of the police and national security service is close that is why I have come to talk to you. The police are responsible for the protection of lives and properties either movable or fixed assets,” Kuc said.

South Sudan parties to the 2018 revitalized peace deal have not yet graduated the 83,000 unified forces comprising of the army, police, wild life, prisons and national security services since February 2020 when the transitional unity government was established.

The parties on August 4th agreed to extend the transitional period that was due to elapse in February 2023 till 2025 to allow them time to complete critical outstanding issues such as graduation of unified forces and enactment of the permanent constitution.