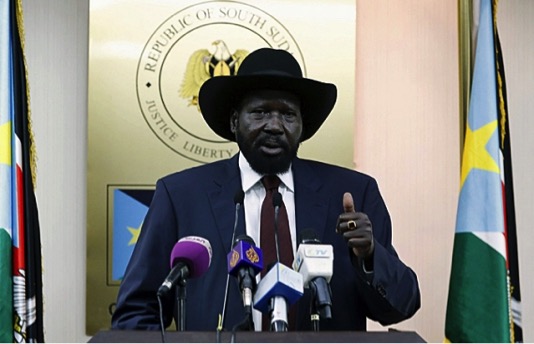 President Salva Kiir Mayardit on Wednesday called upon Humanitarian partners to provide short-term assistance to those affected by floods.

“I am calling upon our humanitarian partners to work with the Ministry of Humanitarian Affairs and Disaster Management to provide short-term assistance to those affected by these floods as we work to find a permanent solution to these natural disasters,” president Kiir reached out.

Mister President expressed hope that team work in addressing the flood challenges will funnel it to success without creating an ecological imbalance down the road at this critical time when thousands of South Sudanese people are in dire need of humanitarian assistance.

The president who condoled with families who lost their love ones to flood also said that he is alarmed by the news of widespread flooding affecting communities in different parts of the country and that his office has been informed of the seven (7) people who died in Majak-baai, in Northern Bahr el Ghazal State due drowning.

“Today, on my own and on government behalf I stand in solidarity with families who have lost their loved ones to flood related hazards,” he said.

He added that the government has placed its focus on finding a long term solution that will balance flood control and wetland protection.

“We consider this approach sensible despite the fact that it will not ease the current floods problem immediately,” he continued.

There was a report In August this year that seven children drowned in heavy floods which swept through Gogrial East county of Warrap state.

Mr.Lueth said over 75,000 households have reportedly been destroyed in the floods, and the road network with neighboring areas are also cut off.

On the other hand, flooding has also led to increase in the rate of snake bites where ten people have also reportedly succumbed to venomous snake bites in recent weeks and 50 others are on medication in Ruweng Administrative Area according to local authorities.

The Director of Information Miakol Makuach said the snakebite incidents are frequently reported in the remote areas without health facilities especially in  Lekno, Jau, Touch and Aleny counties