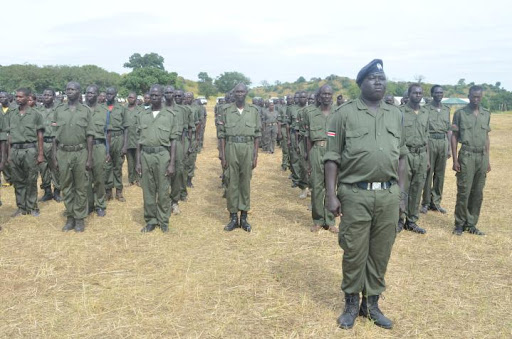 Over 4,000 unified police forces to be passed out in Unity State

Members of the unified police force in Kaljaak training center of Unity State are set to be passed out this week.

The 4,519 unified police forces received their uniforms on Wednesday prior to their graduation on Friday.

Col. Deng Chan Makuach, the commander of Kaljaak unified police forces said the graduation of these forces was delayed to challenges ranging from shortage of food, clean water, medicines and uniforms.

“We have lost 56 trainees due to lack of medication, and out of these two were generals who have died in the training centers, we really welcome this graduation in spirit and in letter,” Makuach told The Juba Echo in Kaljaak training center.

Makuach called upon South Sudanese citizens to come and be part of the graduation ceremony to be held in the Dr. John Garang stadium in Bentiu.

The uniforms were distributed in the presence of the brigadier general Ajang Mabior, the deputy commander of division four of the South Sudan People Defense Force (SSPDF), representatives of United Nations Mission in South Sudan (UNMISS) and SPLA-IO general Gatthuoy Thak.