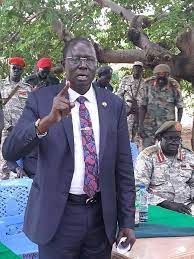 The Governor of Northern Bahr El Gazal State Tong Aken Ngor has called for peace and tranquility as the population prepares to celebrate the upcoming festive season.

“I appeal to everyone in the state and beyond to remain peaceful, we have designated some organized forces to provide protection in some spots suspected to be habitats of gangs,” said Ngor.

He was speaking on Sunday during mass prayers at St. George Catholic church in Aweil town.

Aweil town has over the past few months been experiencing gang-related violence and theft.

The most affected suburbs of the town include, Maper Akot Aru and Apada.

“I want to reiterate that it is upon you to control yourself, If we catch anyone he or she will face it rough, the court will convict you with a fine and serve prison. Is that the life you would want to live?” wondered Ngor.

Ngor called on the population to maintain general cleanliness in all residential areas during the festivities.

“It is nice if they do what they (authorities) say because everyone will go to Church at night, so if they protect people’s homes that is very good. I want to appeal to our citizens to be happy during Christmas and never trust those they don’t know at night,” said local trader Dut Lual Garang while reacting to the governor’s speech.