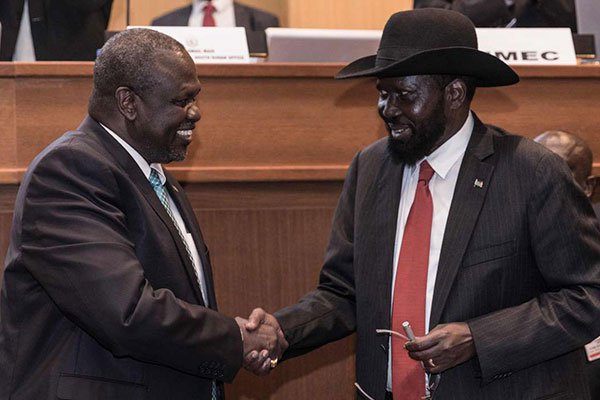 Kiir, Machar to meet over disagreement on Political Parties Act

President Salva Kiir with five of his Vice Presidents are expected to hold discussion today to try and iron out differences on the Political Parties Act that was passed by parliament earlier this month.

Peter Lam Both, the interim secretary general of Sudan People’s Liberation Movement (SPLM) led by Kiir revealed this on Friday.

The SPLM-In Opposition (SPLM-IO) under First Vice President Riek Machar have reservations on the Political Parties Act, after the SPLM and other political parties raised the number of party membership at the state level from 300 to 500.

Under the 2018 revitalized peace deal, all parties are required to have at least 300 members at the state level.

“President Salva Kiir has called for the Presidency meeting next week to address the incident that occurred at the parliament,” Both told journalists in Juba.

Both urged the Transitional National Legislative Assembly (TNLA) to continue carrying out its functions as the Presidency resolves the stalemate over the Political Parties Act.

He also said that the National Constitutional Amendment Committee (NCAC) has no legal competence to make laws for the country which is the mandate of the TNLA.

Meanwhile, President in his capacity as the chairman of SPLM last week met with the members of the SPLM National Secretariat to discuss the activities and plans of SPLM.

The SPLM national secretariat members presented the report of SPLM activities across the states and the three administrative areas as well as discussed the desire for the SPLM to engage political parties in the Africa, especially the national liberation movements.

The SPLM aims to work together with these national liberation movements to discuss issues on post- liberation politics and to improve SPLM foreign policy as the country approaches for elections in 2023.

In addition, the members also discussed SPLM’s engagements with other political parties inside South Sudan, the constitutional amendments that are being discussed and passed by the assembly as well as the recent boycott in the TNLA by SPLM-IO members over disagreement on the Political Parties Act.