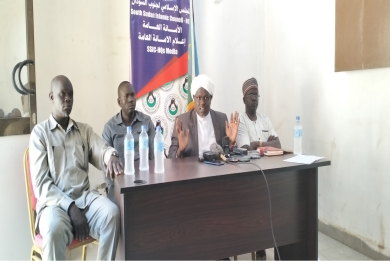 Abdalla Baraj Rwal, Secretary General of the Islamic Council of South Sudan on Monday said that they have formed different committees to mobilize resources to help thousands of people displaced by conflict since August in the state.

“Many people are displaced among them are children who lost their parents, and these children need our support, many of them are now in Melut County, I would like to call upon business people, general public, humanitarian  organizations and government institutions to support these people,” said Rwal during press conference held in Juba.

The fighting in Upper Nile was initially between splinter factions of the Sudan People’s Liberation Movement-in opposition (SPLA-IO) but later on pitied the White Army from Jonglei State against the indigenous Shiluk community in Fashoda County of Upper Nile State.

“If we join our hands we will be able to support these people, it’s good to help ourselves as South Sudanese than waiting from people from outside to come and help us,” he said.

Rwal called on well-wishers to deliver in-kind support to the office of the Islamic Council or any Mosque within the country.

Ali Mure Ali Awuda, Secretary for Organizations, Humanitarian Affairs and Disaster Management of the Islamic Council called on other faith-based organizations and as Muslim community to join them in their campaign for Upper Nile.

More than 40,000 civilians have been displaced from the renewed fighting in mid-November in the state putting further pressure on the Malakal protection of civilians’ site.