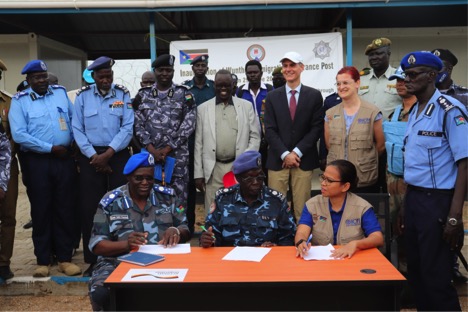 The International Organization for Migration (IOM) has given the new immigration facility to government of South Sudan today Friday at Wunthou border post of Upper Nile State.

The border post in Wunthou Renk County of Upper Nile State was constructed by IOM with support from the Government of Germany.

Kristina Uzelac, IOM’s Acting Head of Operations says, the opening of the border will create new opportunities for cross-border trade,movement of people, migrants, returnees and citizens.

She advised that it is also vital for the authorities to manage border flows and promote peace and security at the border in line with achieving Goal 10.7 of SDGs.

Lt. Gen. Dr. Olaw Adiang, the Assistant Inspector General for Border Police, who represented the Minister of Interior during the ceremony in Renk said that despite Sudan and South Sudan having disagreements due to contested international boundaries, communities frequently cross borders, goods are being traded between the countries, and many of the communities in the area have cross-border linkages.

The Lt.Gen.emphasized that wunthou border point approximately 60Km north of Renk Town needs to be well managed along with providing services to address the needs of migrants, refugees, and citizens who may need assistance while crossing the border.

South Sudan has a total of 26 official borders across its administrative territory with Six of these located in Renk County border with Sudan alone.