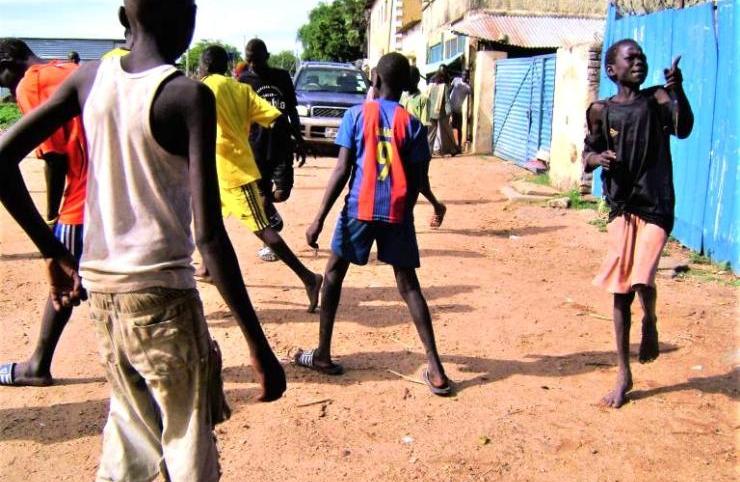 David Dario who drives a Subaru in South Sudan’s capital has fallen prey to these young people often times.

At peak traffic hours, streets are suddenly filled with young milling among the vehicles jammed up.

They are most active in the evening hours when drivers are going home to rest after the day’s work.

These young people are not just common pedestrians. They move in between the car rows seeking for any valuables to snatch.

“When I was nearly 100 metres to Lou Medical Clinic, my wife called me,” Dario recalls on a day when his phone was snatched from his ear.

“I was left starring with my mouth agape and confused of what to do next because my phone is gone, just like that, it was snatched away,” he said.

Lou Medical Clinic is notorious for traffic jams, usually going on for several hours after 6.00pm.

Dario’s ordeal is what public transport users face every day, especially in the evenings near roundabouts and narrow stretches on the highways.

Unsuspecting people driving on the streets have lost a lot of valuables including phones, watches as well as wallets with money to the young people.

The young man told Juba Echo that it’s an organized theft and most of them are driven by hunger.

Many of them grew up as orphans and cannot get employment, even odd jobs are hard to come by.

“It’s all about survival,” Simon said, explaining that they work in groups and share their loot at the end of the day.

“We have a lot of groups, others operate pick pocketing in the market, people like me operate on the traffic jams and others near car parks to break car windows and sometimes steal some valuable car spares for resale,” Simon said.

“We are only united by a common cause and that is feeding our empty stomachs.”

Even those riding motorcycles have fallen prey to them.

Apart from prowling in between vehicles, some of the petty thieves ride motorbikes, called “toronto” and grab bags and valuables of people on boda boda.

The crimes persist across all the streets in Juba, even under the watchful eyes of security officials who would rather look the other side.

Juan Josephine fell victim too, and warned it’s very common to lose mobile phones, hand bags and other small valuables when you use a boda boda because of the toronto.

“I think it’s the toronto boys changing tactic in order not to be outdone because people hardly use boda boda’s in the evenings,” Juan said of those targeting cars.

According to a police officer at Lou Medical Clinic junction, the thieves are very many and slippery.

“You have to always be on the lookout for those pedestrians who walk in between cars whenever there is a traffic jam,” the officer who preferred to speak on anonymity told Juba Echo.