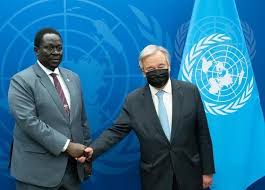 Hussein Abdelbagi Akol, the Vice President for Services Cluster said this on Thursday during his address at the 77th UN General Assembly in New York.

“To mitigate effects of flooding on the population and livelihoods, South Sudan is donating ten million dollars to the WFP to alleviate the suffering of the affected displaced communities,” Akol said.

He disclosed that 80 percent of the country has been affected by three consecutive years of flooding, leaving about 55.5 percent of the population severely food insecure.

“The government of South Sudan appreciates the critical humanitarian and technical support made by member states in this forum and it looks forward to its continuation, however, we need the support of the international community to reach the entire flood and drought-affected areas and communities,” he said.

President Salva Kiir is expected to call a conference of all the humanitarian organizations in South Sudan to coordinate humanitarian activities.

“The government of South Sudan is committed to providing security and protection to the relief workers, together, we can save our planet by playing our roles and by supporting each other to mitigate effects of climate change and to come up with alternative methods and solutions based on available protocols,” Akol said.

He also called on the international community to lift targeted sanctions and an arms embargo on South Sudan imposed since outbreak of conflict in December 2013.

“As we make progress in the implementation of the Revitalized Peace Agreement on the Resolution of Conflict in the Republic of South Sudan, we are calling upon the International community and UN in particular to revise individual and targeted sanctions, arms embargo imposed on South Sudan to enable successful completion of the remaining provisions of the peace agreement outlinde in the New Roadmap,” Akol said.