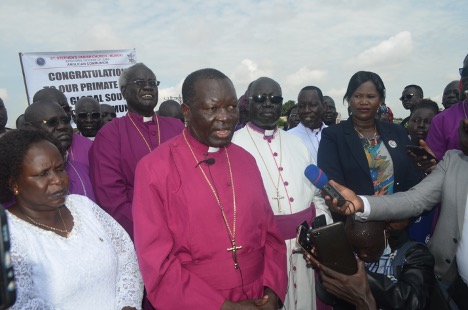 Justin Arama Badi the Archbishop of Episcopal Church of South Sudan yesterday after his visit to Bor the capital of Jonglei disparaged report that the former disqualified Arch Bishop of Jonglei province Ruben Akurdid is due to be reinstated back to his job.

The Prelate told the media when he returned from United Kingdom that, the message widely shared on social media about restoration of Akurdid is a lie.

He hinted that Ruben Akurdid’s visit to Jonglei was in the capacity of a retired Bishop just like the rest of the retired Bishops adding that the retired man of God  will remain as regular resident of Jonglei state.

Another former Bishop Dr. Deng Bul backed up the Arama point of view and accused the government of interfering with Church affairs.

“I know the return of Akurdid to Bor was not for his re-establishment but for his leisure and normal visit as mere citizen or retired Bishop like me. The problem is that, the government interferes a lot with Church issues by intimidating leader citing a scenario where a Bishop was shot in Bor of Jonglei and the government did nothing to bring the suspect to face the law,” he said.

In a dramatic turn of events, Mama Nyadeng de Mabior the vice president for gender, youth and humanitarian cluster admitted that, some government officials feel intimidated by church leaders and as such they respond to it harshly forgetting that the government is formed in the image of Bible.

“Some of our government officials feel intimidated by Church leaders and that is why there are recuring issues in Jonglei state. I was shocked when I attended a meeting with President Kiir and he started talking about church affairs”, she wondered.

Quoting the separation of religion and state as stipulated in SPLM and the Constitution of South Sudan, she added that church has been put apart from the state which is the government and therefore, it is only about the implementers to follow lines without crossing somewhere else.

Ruben Akurdid was forced out of office last year by Bishop Justin Badi Arama due to his “insubordination” and “corruption allegation” in Bor Province church.