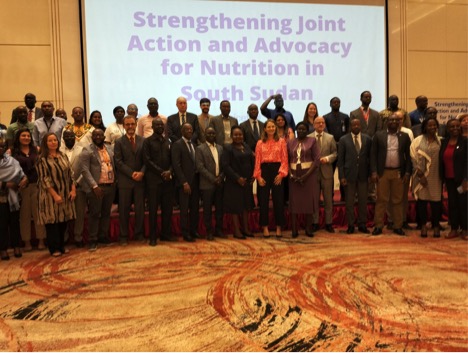 Development Partners Call For Collaboration Against Malnutrition In South Sudan

This joint call by eminent institutions emanates from an estimation that put a whopping 1.3 million children and another 683,000 composed of pregnant women, girls and breastfeeding mothers at severe malnutrition with the most affected populations being found in Unity, Jonglei, Northern Bahr El Ghazal, Warrap and Upper Nile states.

Speaking during an Event entitled Strengthening Joint Action and Advocacy for Nutrition in South Sudan on Tuesday Hon. Yolanda Awel Deng, the South Sudan minister of Health said that it’s very important to fight malnutrition in order to end preventable diseases which tend to strive where there is food insecurity.

“Diseases that are preventable becomes a threat due to food insecurity in the country, most of the people go hungry and when they go hungry most of the simple diseases enter into their bodies,” she said.

The minister who upholds that mobilizing resources around this topic will enable them make some noteworthy headway to minimize  malnutrition issues also appealed to development partners to adapt mechanisms of tackling climate change to save children and mothers from its devastating effects.

Her Royal Highness Princess Sarah Zeid Ra’ad of Jordan, Special Advisor to WFP on Maternal & Child Health and Nutrition, said the gig against malnutrition is not an event but a process that demands efforts from all players.

“Good nutrition is bedrock for sustainable development, peace and security, there is more to be done in the fight against malnutrition with the limited resources available, the condition of women is worsening, and one in  two children are malnourished,” she stated.

Ms Makena Walker, WFP acting Country Director, appreciated all the donors and government of South Sudan for joining effort on the fight against malnutrition in south Sudan announcing that WFP will continue to work with all Nutrition partners under the leadership of the government to fashion a better tomorrow for the country’s next generation.

On the other hand, Ms. Hamida Lasseko UNICEF Country Representative commended the government of   South Sudan for directing efforts to addressing the high challenges imposed by high prevalence of malnutrition among children and women despite the widespread food insecurity, illness and poor hygiene.

She pledged to continue spearheading the delivery of lifesaving intervention to the population indeed together with partners.

WFP provides specialized nutritious food and nutrition counselling to pregnant and breastfeeding women, children between 6 and 11 months of age as well as kala-azar and tuberculosis patients and people living with HIV.