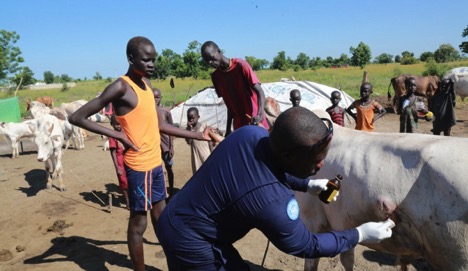 Vétérinaires Sans Frontières Suisse has vaccinated a total of 10,500 animals including cattle and sheep against HS disease and contagious Bovine Pleuropneumonia CBPP in greater Mayom County of the northern Unity State.

“We have started the animal vaccination yesterday, and we managed to vaccinate 5,000 cattle and 5500 sheep in Rieh, Buothnyigar, Mayom town, Mankien, Wangkei, Kuerboni, Tam and Ruathnyibol and the purpose of vaccination is to rescue animals from two common diseases, contagious Bovine Pleuropneumonia CBPP and HS diseases,” said Elijah Puot, Veterinaires Sans Frontieres Suisse field officer in an interview with Juba Echo on Tuesday.

Puot said the vaccination campaign was still ongoing in Mayom.

He said that VSF Suisse signed an agreement with the UN Food Agriculture Organization (FAO) to implement the vaccination for six month period.

The project is supported with funds from the Central Emergency Response Fund (CERF) a humanitarian fund established by the United Nations General Assembly.

Mayom County consists of 10 Payams according to the 2008 South Sudan National Census.

“We have conducted this vaccination campaign because we have received several calls from cattle leaders and the ministry of animal resources and fisheries in the state,” said Puot.

Johnson Bol, the Unity State Director General in the Ministry of Animal Resources and Fisheries, said they will continue to support VSF Suisse in extending the vaccination to other counties.

Several herders have complained about the death of their animals because of devastating flooding in seven counties of Unity State. 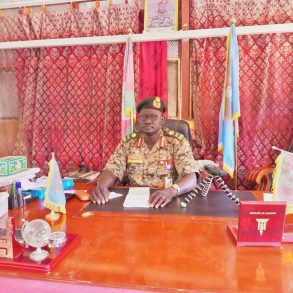