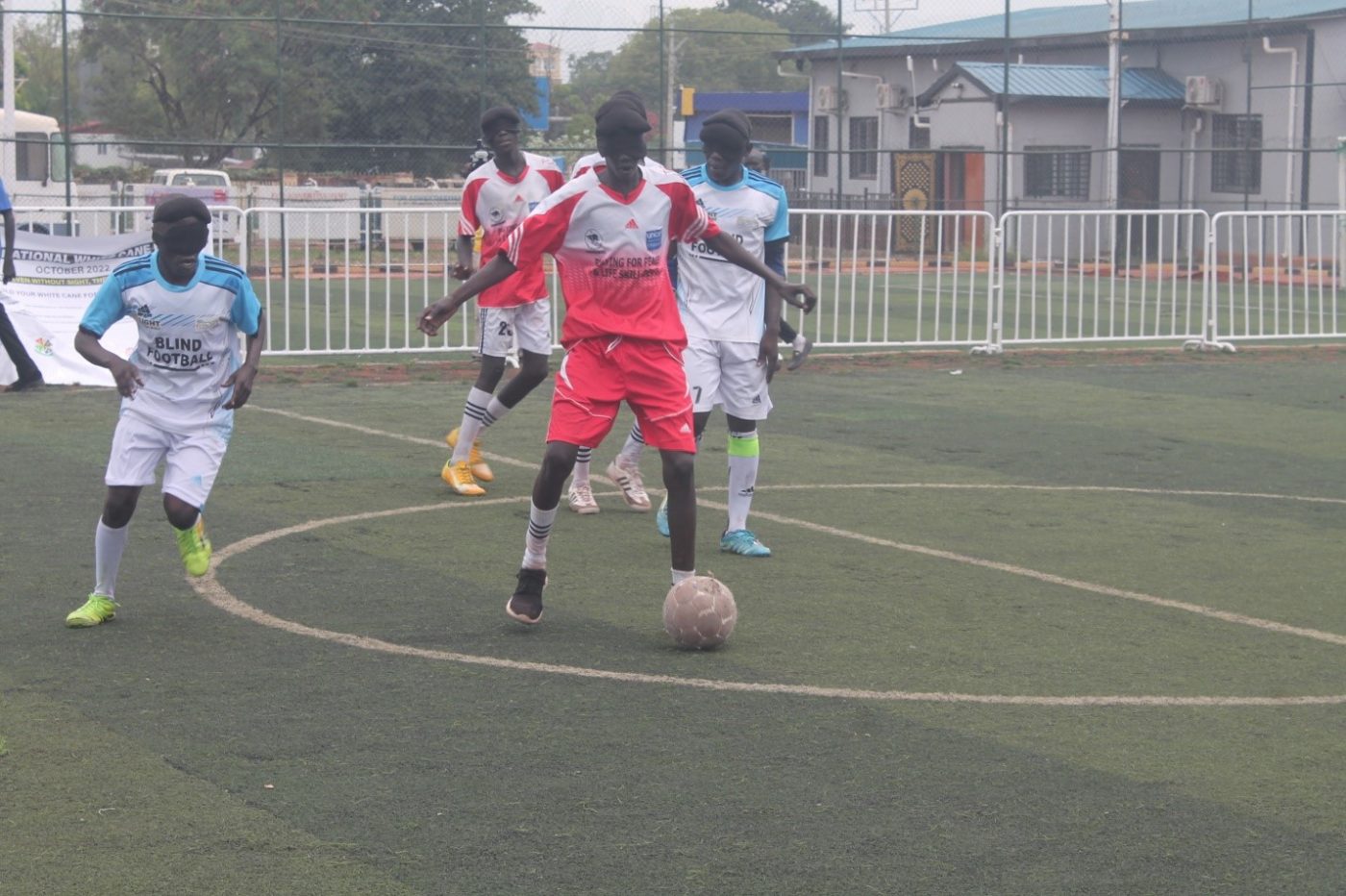 Wearing a Blind fold, Jimmy Just Augustine a -23- year- old who plays for Shining star blind football team can be seen on a hot Tuesday afternoon tussling it out with an opponent for the ball with sound devices on an artificial turf.

Augustine who is visually impaired is among a new crop of footballers aspiring to represent his club, and country at the regional and international level as the game of blind football grows in South Sudan.

He was among several players who were honored with medals at a match organized by Light for the World NGO to mark International White Cane Safety Day, celebrated annually every October 15th to highlight the need for inclusivity for people with disabilities.

“We are not seeing, we use our ears to hear the jingling sound of the ball then we follow the ball,” Augustine told The Juba Echo after his team lost to Buluk a team comprised of sighted people in Juba.

“You know in the past it was not easy, we were knocking ourselves, but now we are able to control and shoot the ball, and we are also able to run with the ball,” he added.

Augustine is among the 85 South Sudanese fully trained in blind football. Blind football is an adapted form of five-a-side football, played with an audible ball on a pitch surrounded by kick-boards – a physical barrier indicating the touch lines – and without the offside rule.

“I want to tell the rest of my colleagues, and the general public that disability is not inability, the person that cannot see can be able to do anything that a person without disability can do,” said Augustine.

Simon Madol Akol, a 24- year- old head coach of South Sudan blind football who trains Augustine, said having introduced the game in 2020 they are now on the right track to grow blind football beyond Juba.

“We also want to expand blind football to other states, because we have already tried expanding in the whole of Juba,” said Akol.

“We have been moving in schools training kids how to play blind football because we know that some of our players here are studying in some schools, and they don’t get chance to play with their peers who are sighted,” he added.

Akol who earned his training online from Germany, said the blind football association is currently not registered with the government, adding that he hopes to build his young team to represent the country at tournaments.

“We needed to come up with something unique that can get the youth who are visually impaired to participate fully, that’s when we thought about blind football,” he disclosed.

“Sometimes when I tell people that I am a blind football coach they wonder, so there are rules and guidelines that govern blind football, first we use our ears and not our eyes to play blind football,” said Akol.

The Union of European Football Associations (UEFA) in partnership with Light for the World are the brains behind blind football in South Sudan. The football project is being implemented by South Sudan Association for the Visually Impaired (SSAVI).

Esbon Umbo Jacob, a 20- year-old team mate of Augustine who became visually impaired at age of 7, said they have so far gained lots of experience in blind football after playing many matches.

“We have won two games since we started blind football, the first match we played in 2021 and won a trophy, and today’s match is the first we have lost,” he said.

“I am not blind but this blind football we are playing is very good, it will promote peace in our country. When we play we are all equal, and we can promote peace,” said Magok.

“I am playing with them because we are all equal, and disability is not inability,” he added.

Blind Football is variation of futsal designed for players who are visually impaired. It is currently a Paralympic sport, and the International Blind Sports Association (IBSA) also organizes a World Championship.

Nema Juma, communication and advocacy officer for Light for the World used the blind football match to remind the public on the importance of promoting inclusivity for people with disabilities as stipulated under the UN Convention on the Rights of Persons with Disabilities (UNCRPD).

“It is very important to recognize the importance of White Cane Day as a mobility devise that supports persons of visual impairment to access services as stipulated in the UNCRPD, article 26 which talks about halitation and rehabilitation calls on state parties to promote availability, knowledge and use of access device and technology devise for persons with disability as they relate to habitation and rehabilitation,” said Juma.