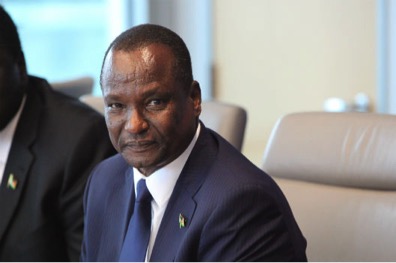 Gai made this call while in Bor town of Jonglei State last week, where he visited to check on the progress made by Africa Resource Company (ARC) on Juba-Bor road.

“One of the line we must draw as parties is that we should not take this country back to war at all and we must compete peacefully to get power,” said Gai.

Despite signing of the 2018 revitalized peace agreement, the country remains in the grip of political instability, economic ruin, and threats of looming hunger.

Gai pleaded with political leaders from various parties never to return the country to war again.

He stressed the need to unite and reconcile South Sudanese to move the country to achieve lasting peace.

“We participated in phase one and now we are again participating in phase two and phase two is the unification of our people, developing our people and moving this country forward,” said Gai.

Gai called on politicians to summon a new spirit of dialogue and togetherness to achieve stability in the country.

“What we need to do to move this country forward is our unity as politicians because when we are united we can have peace among ourselves to be able to create a conducive environment,” he said.

South Sudan descended into conflict in December 2013 following political disagreement between President Salva Kiir and his then deputy Riek Machar causing to split in the army forcing soldiers loyal to the respective leader to fight.

The conflict killed tens of thousands and displaced over 2 million both internally and externally.

A peace deal signed in 2015 collapsed in the aftermath of renewed violence in July 2016.

Despite signing the 2018 revitalized peace deal in Ethiopia, the parties are yet to conclude the unification of the 83,000 forces charged with taking up security during the transitional period.