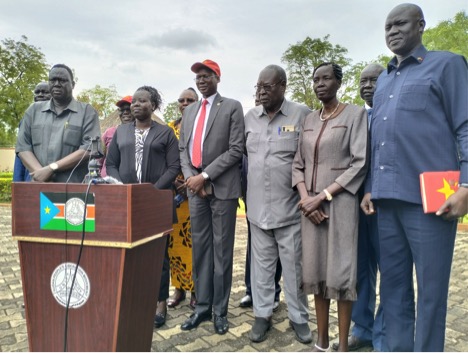 The leadership of SPLM party is yet to decide on the “vote of no confidence” by the Council of states against the governor of unity state whom they recommended for removal from his position by the President.

The council accuses Governor Joseph Nguen Manytuil of negligence leading to insecurity in the state including conflict in Leer County, the killing of the commissioner of Mayom County Chuol Gatluak and the recent extrajudicial killing in Mayom.

However,Cde. Kuol Atem Bol, the SPLM secretary for political Affairs, organization and Mobilization who spoke to the media on Wednesday after the meeting between SPLM top leadership and their senior members in the council of states says that the procedure in which the council of states took to withdraw their confidence in the governor was wrong because they should have abstained from the motion and consulted the party for guidance.

“That is not the way, members of each party should have first consulted their parties to discuss this issue against the governor especially members of the SPLM,there is no way a parliament can sit and come up with decision without consulting with the party,” he said.

Mr. Atem revealed that they called for a joint meeting of SPLM leadership and members of the council of states to discuss about the issue that led to the withdrawal of confidence in the governor of Unity state and are now doing consultation.

“Our stand as a party is that we are going for more consultation, we have not rejected, and we have not accepted it because it should be done through the party,” he detailed.

The party secretary also publicized that President Kiir and the chair of the SPLM party have formed a committee to carryout investigation about the allegation against the governor and that it is their report that will inform their next step about the governor’s impeachment project.

However,Josephine Nakuru the chairperson of information and Members’ Affairs of the council of State on her part said that the process is still on and they are not ready to relent.

“We are not withdrawing our statement. We are still gathering facts about whether these things were happening and our voices still stand,” she confirmed.

She revealed that the mandate of the honorable members of the council of states is to oversee the general administration of the states adding that they  have already handed over a dossier of resolutions against the Governor  to the President for review.