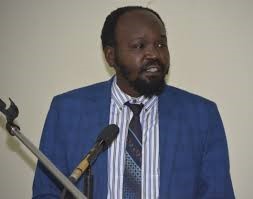 The government has accused Uganda of closing a major route to supply commodities to local markets in South Sudan.

The Minister of Humanitarian Affairs and Disaster Management, Peter Mayen, said Kampala has closed markets making it difficult to supply commodities to South Sudan and the Democratic Republic of Congo.

“The current global economic crisis, believed to be sparked by multiple factors such as the war in Ukraine and the pandemic, has compelled countries to ban the export of food commodities,” Mayen said.

“We have apparently, to say basically, and openly that Uganda has closed one of the major markets which we used to get the supply from and not only us, but also the Republic of Congo and other countries,” he added.

Mr Mayen called on neighbouring countries not to restrict food supplies to South Sudan amid a brewing food shortage globally.

Last month, Government announced that Uganda has closed down a major export market in a move to curb its own food insecurity.

He added that the food supply that South Sudan used to get is no longer getting it. The situation could get worst for the 8.9 million people who are already food insecure in the country because of the humanitarian situation in the country, only a fraction of the country can afford their daily needs.