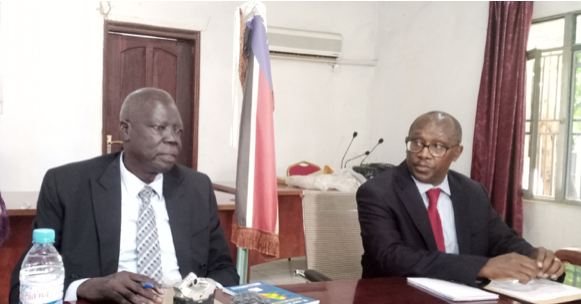 This could now be tamed once the Public Financial Management Bill, prescribed under the 2018 revitalized peace agreement is tabled before the national parliament.

Gichira Kibara, the Chairperson for the National Constitutional Amendment Committee (NCAC) confirmed that his committee that drafted and revised the bill has tightened financial controls to curb wastage of public resources.

“We have tightened the borrowing provision and actually established public debt management office within the Ministry of Finance, and also dealt with the issue of unlawful expenditure because that was a major weakness in the law,” Kibara told journalists while presenting the PFM Bill, 2022 to the Ministry of Justice and Constitutional Affairs on Wednesday in Juba.

The PFM Bill will soon be tabled before law makers to pass it into law.

Kibara noted that Bill also seeks to tighten the budget making process in terms of timeline.

The PFM Bill will ensure transparency in revenue sharing between the national government and the states.

Kibara revealed that they will also amend five more bills including Anti-Corruption Bill before the end of this year.

“We also strengthened the role of the Ministry of Finance in terms of financial oversight of the sector, overall the bill goes towards strengthening accountability and transparency in the expenditure of public funds, and we believe it will go a long way towards improving the public finance management in this country,” he said.

”We hope our people feel comfortable that the spirit of the peace agreement is being actually followed and is being realized, with this we expect that the governance of our public financial obligations in the country will be to the expectations of the people,” Arol said.