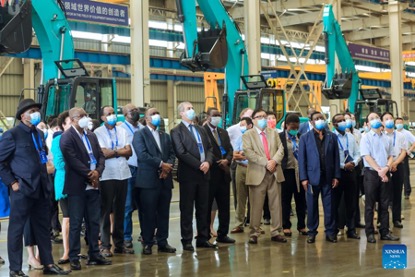 CHANGSHA — Twenty-nine diplomats from 15 African countries visited the pilot zone for the In-Depth China-Africa Economic and Trade Cooperation Program in central China’s Hunan Province from July 27 to 29. They expressed confidence in China’s economy and said they expected closer economic and trade ties between their country and China.

Despite recurring COVID-19 outbreaks and the complex and volatile international situation, the diplomats said China’s economy is resilient and the Chinese market is full of opportunities. They expressed hope to strengthen cooperation with China in sectors such as agriculture, the digital economy and health care.

According to the Tanzanian ambassador to China Mbelwa Kairuki, China’s 1.4-billion-strong consumer market has plenty of opportunities for all African countries.

“China-Africa trade and economic cooperation has been increasing in the last 20 years,” said Kairuki, who is convinced that there will be more opportunities for Tanzania to export products to China, especially high value-added products.

Tanzania is particularly looking to seize opportunities for its agricultural goods in the Chinese market, facilitated by the pilot zone for in-depth China-Africa economic and trade cooperation, he said.

“The pilot zone combines the advantages of quality African agricultural products with the processing and distribution strengths of our Chinese partners, helping our products to be able to increase in value according to the needs of the Chinese market,” Kairuki said.

The pilot zone is an important initiative under the “Nine Programs” that were established at the Eighth Ministerial Conference of the Forum on China-Africa Cooperation in November last year. New models and paths for China-Africa trade, investment and financial cooperation are being cultivated to serve the transformation and upgrading of China-Africa economic and trade cooperation.

During their three-day visit to the pilot zone, the African ambassadors paid visits to the core area of the pilot zone as well as key enterprises.

According to Hassane Rabehi, Algerian ambassador to China, the China-Africa Economic and Trade Expo and the China-Africa In-depth Economic and Trade Cooperation Program pilot zone offer new opportunities for cooperation with Africa that can create additional sources of income and employment, diversify commercial products and increase exports of African goods to China.

“These concrete objectives confirm the sincerity of the Chinese leadership to strengthen capacity building in African countries, accelerate market access to China for African products, expand import categories and improve supporting facilities for exchanged commodities between China and Africa,” Rabehi said, affirming that for both sides, these actions are commensurate with the noble objectives of the Belt and Road Initiative.

“We are very impressed about the development of China since the reform and opening-up, because we have seen that China is growing in strength,” said South African ambassador to China Siyabonga C. Cwele, adding that China-Africa economic and trade cooperation has brought opportunities and development to developing countries.

Bilateral trade and investment have brought practical benefits to people not only in China but also in other developing countries, by creating jobs and better lives, Cwele said.

“That’s what you call a community with a shared future for mankind,” he added.

According to the General Administration of Customs, trade between China and Africa reached an all-time high of 254.3 billion U.S. dollars in 2021, up 35.3 percent year on year, of which Africa exported 105.9 billion dollars of goods to China, up 43.7 percent.

From April 28 to May 12, the online African Products Shopping Festival was held successfully, attracting 23 African countries. Through livestreaming and e-commerce platforms, Chinese consumers can easily shop for African goods such as coffee from Ethiopia, black tea from Kenya and wine from South Africa.

Teshome Toga Chanaka, Ethiopian ambassador to China, said the focus of China-Africa economic and trade cooperation is on agriculture, because it is the foundation of most African economies.