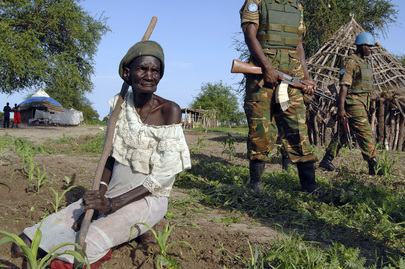 Peacekeepers on patrol stand behind a woman in Abyei

South Sudan and Sudan contested over the ownership of Abyei a decade ago, a region on the border between the two countries leading to holding plans for its secession until a plebiscite is held.

Now as South Sudan marks ten years, the people in the region remain in poverty and frustrated at the inaction of the two countries.

“It is frustrating to see people celebrating every year while the issue of Abyei is not settled,” Mithiang Deng Mithiang, a teacher at Comboni Primary School in Abyei town said in an interview with Juba Echo.

When South Sudan severed territory from Sudan in 2011, both it and the former master claimed ownership of Abyei, an oil-rich region occupied by both the Ngok Dinka aligned to South Sudan and the Arab Misseriya who assume a more Sudan linkage.

Recurring cattle raids, killing, child abduction and destruction of properties have been the relationship between the two communities.

Reports by a group, the Community Protection Committee suggest that between 2012 and 2021, 443 civilians have died in attacks, including the Ngok Dinka Paramount Chief, Kuol Deng Kuol.

About 28 people have been abducted in the period and 5,011 cattle looted.

According to Lal Mijak, a resident of Agok, there is no reason to smile while Abyei remains a contested area ten years after the rest of South Sudan got free.

“It is good for people of South Sudan to celebrate, but I as a native of Abyei do ask myself, ‘why should I celebrate while my area is not liberated?’” Mijak pondered.

“During these years, we have been suffering,” he told Juba Echo.

“There is no stability in terms of economy and security and if civilians go to farm, they get killed and because of this they live in fear.”

He craves for the day the final status of Abyei would be delivered, hoping it will come to them with stability and peace.

Awan Abiei, a retired soldier who fought for South Sudan’s liberation cannot access his home in Ala County to the north of Abyei because of insecurity.

“We gave birth to children in disaster and we are still in disaster,” Abiei voiced his frustration.

“I want people of South Sudan to support us and free Abyei so that our children can find some rest.”

A comprehensive peace agreement signed between the Sudan People’s Liberation/Army and the regime in Khartoum in 2005 ended 21 years of war that left an estimated 2.5 million people dead.

It gave hope across the South, including in Abyei region, that they would be free at last.

But this was not to be for the region as yet.

Polls were to be held simultaneously with a referendum that saw South Sudan separated from Sudan in 2011, but it was postponed due to a dispute over voter’s right.

Clashes between Sudan Armed Forces and SPLA led to the United Nations Security Council directing both countries to withdraw their forces from Abyei, and deploying a United Nations Interim Security Force for Abyei with a mandate to protect civilians and their property.

The Ngok Dinka conducted a unilateral referendum in 2013 and voted nearly 100 percent in favor of joining South Sudan, but neither Khartoum nor Juba recognized the results, leaving Abyei in a political dilemma.

For Nyanwai Deng, a widow with six children to feed, her best ally would be security to allow her do odd jobs for survival.

Deng, who lost her husband way back in 1999 during the liberation struggle sells charcoal in Abyei town.

“If the issue of Abyei is settled and stability returned, we can go and cultivate and our children will get employed,” she told Juba Echo.