China stands ready to work with Russia to keep advancing the bilateral relations in a new era and jointly promote global governance in a more just and reasonable direction, President Xi Jinping said on Wednesday.

Xi, also general secretary of the Communist Party of China (CPC) Central Committee, made the remarks during a meeting with Chairman of the United Russia party Dmitry Medvedev in Beijing, who was on a visit to China at the invitation of the CPC.

Over the past 10 years, China-Russia relations have withstood the test of changes in the international landscape and always developed at a sound and stable high level, said Xi.

It is a long-term strategic choice made by China and Russia based on their own national realities to develop a comprehensive strategic partnership of coordination for a new era, he said.

Beijing and Moscow agreed to upgrade their relations to a comprehensive strategic partnership of coordination for the new era in June 2019.

Exchanges between the ruling parties

The visit to China by the chairman of the United Russia party came two months after the CPC concluded its 20th National Congress.

During Wednesday’s meeting, Xi noted that it was made clear at the congress that the central task of the CPC is to build China into a great modern socialist country in all respects and advance the rejuvenation of the Chinese nation on all fronts through a Chinese path to modernization.

“We have sufficient strength and full confidence in the Chinese path to modernization, which will offer more opportunities for world peace and prosperity,” he said.

The long-term institutionalized exchanges between the CPC and the United Russia party have become a unique channel and platform for China and Russia to consolidate mutual political trust, promote mutually beneficial cooperation and showcase strategic coordination, providing solid support for the long-term and stable China-Russia relationship in the new era, said Xi.

Noting that the exchanges between the ruling parties of China and Russia are entering “the third decade,” Xi voiced hope that the two parties will continue their in-depth communication on governance experience and how to promote the dovetailing of development strategies and advance multilateral cooperation among political parties.

The two sides should learn from each other on the ruling parties’ building and contribute wisdom and strength to the deepening of China-Russia comprehensive strategic coordination, he said. 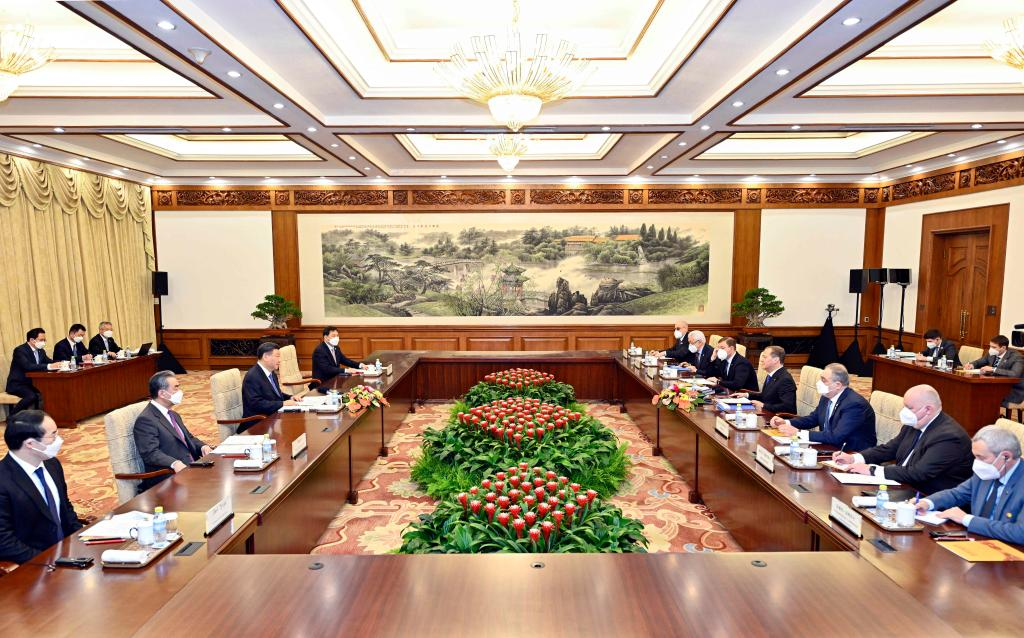 Xi Jinping, general secretary of the Communist Party of China (CPC) Central Committee and Chinese president, meets with Chairman of the United Russia party Dmitry Medvedev, who visits China at the invitation of the CPC, at the Diaoyutai State Guesthouse in Beijing, capital of China, December 21, 2022. /Xinhua

For his part, Medvedev congratulated Xi on his re-election as general secretary of the CPC Central Committee and on a series of major outcomes of the 20th CPC National Congress.

Under the leadership of the CPC, China’s greater development will not only benefit the 1.4 billion Chinese people but also is of great significance to the whole world, said Medvedev, adding his belief that the decisions and plans made at the  20th CPC National Congress will be effectively implemented.

He said relations between the two ruling parties have maintained a high level of development, and the two sides have carried out extensive exchanges and cooperation in recent years.

The party of United Russia is ready to strengthen the exchanges of experience in governance with the CPC, implement the important consensus reached by the two heads of state, advance cooperation between the two countries in trade, economy, energy and agriculture, and jointly reject all kinds of pressures and unjust measures imposed externally to promote greater development of Russia-China comprehensive strategic partnership of coordination, said Medvedev.

During the meeting, Medvedev first handed over a signed letter from Russian President Vladimir Putin to Xi and conveyed the Russian leader’s friendly greetings and best wishes to the Chinese president, who asked Medvedev to send his own greetings to Putin.

Xi on Wednesday reiterated China’s stance on the Ukraine crisis, emphasizing that the Chinese side always decides its position and policy based on the merits of the matter itself.

China is committed to an objective and impartial stance, and it actively promotes peace and facilitates talks, he said.

It is hoped that all parties concerned can remain rational and restrained, engage in comprehensive dialogue and resolve common security concerns through political means, said the Chinese leader.

Medvedev said the Ukraine crisis happens for a reason, which is “very complicated,” adding that Russia is willing to solve the problems it faces through peace talks.

(Cover: Xi Jinping, general secretary of the Communist Party of China (CPC) Central Committee and Chinese president, meets with Chairman of the United Russia party Dmitry Medvedev, who visits China at the invitation of the CPC, at the Diaoyutai State Guesthouse in Beijing, capital of China, December 21, 2022. /Xinhua)