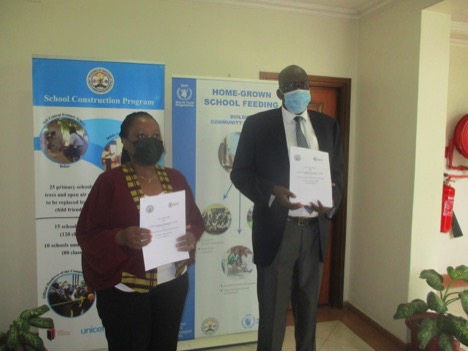 The government and the UN World Food Program (WFP) on Tuesday signed agreement to provide meals to over 530,000 children in 1,100 schools for a period of 19 months.

Kuyok Abol Kuyok, Undersecretary in the Ministry of General Education and Instruction said that the project will enable them to provide school meals to over half a million children in school across the country.

“This program is one of the strategies we have to improve education in South Sudan and we are very grateful to the World Food Program and donors,” Kuyok told journalists in Juba.

Adeyinka Badejo, WFP Deputy Country Director revealed that the MoU signed with the Ministry of General Education and Instruction is aimed at increasing enrolment, as well as encourage parents to keep children in school.

“We will be focusing on schools which are in more vulnerable areas where the level of food insecurity is high, and where participation in education is low and where nutrition rates are concerning,” said Badejo.

She disclosed that the home-grown school feeding program will provide children the assurance of having daily nutritious meals in schools.

In May, South Sudan lifted it’s partial COVID-19 lockdown allowing schools to reopen for learners, but some parts of the country facing emergency food levels due to sub-national conflicts and flooding.

This year’s integrated food security phase classification assessment released by UN agencies, warned that 7.24 million people will face severe acute hunger at the height of the lean season between May and July, while 1.4 million children will be acutely malnourished.

“We hope that through the school feeding program, we will also be able to attract many children to school. We understand that over 2 million children at this point in time are outside of the school system,” said Badejo.

The WFP school feeding program was introduced in the then Southern Sudan in 2003 prior to independence from Sudan in 2011, with the aim of enhancing access to food.