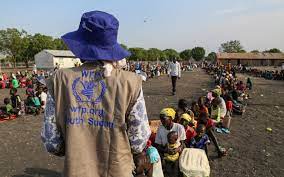 The United Nations World Food Programme (WFP) has been forced by lack of funds to suspend food assistance in South Sudan as the nation faces the hungriest year since independence.

The suspension of aid comes at the worst possible time for the people of South Sudan as the country faces a year of unprecedented hunger.

Over 60 per cent of the population is grappling with severe food insecurity during the lean season, fuelled by continuing conflict, severe flooding, localized drought, and soaring food prices exacerbated by the crisis in Ukraine.

“We are extremely concerned about the impact of the funding cuts on children, women and men who will not have enough to eat during the lean season. These families have completely exhausted their coping strategies. They need immediate humanitarian assistance to put food on the table in the short-term and to rebuild their livelihoods and resilience to cope with future shocks,” said Adeyinka Badejo, Acting Country Director of the World Food Programme in South Sudan said in a statement released on Tuesday.

“Humanitarian needs are far exceeding the funding we have received this year. If this continues, we will face bigger and more costly problems in the future, including increased mortality, malnutrition, stunting, and disease,” said Badejo.

“Almost one-third of the acute food-insecure South Sudanese the United Nations World Food Programme (WFP) planned to support this year will be left without humanitarian food assistance due to critical funding shortages, heightening the risk of starvation for 1.7 million people” the statement read.

According to the statement, the WFP had exhausted all options before suspending food assistance, including halving rations in 2021, leaving families in need with less food to eat. These latest reductions in assistance will also impact 178,000 schoolchildren who will no longer receive daily school meals – a crucial safety net that helps keep South Sudanese children in school to learn and grow.

“More drastic reductions will be unavoidable unless more funding is received, which will leave vulnerable people unable to meet their basic food needs and reverting to survival strategies such as skipping or reducing meals, selling assets, using child labour and child marriage” it read.

In 2022, food insecurity in South Sudan is alarmingly high. The latest Integrated Food Security Phase Classification (IPC) assessment warned that 7.74 million people will face severe acute hunger at the height of the lean season between June and August, while 1.4 million children will be acutely malnourished.

According to the statement WFP is prioritizing its limited food assistance to reach 4.5 million people struggling with severe hunger across 52 counties in South Sudan, including 87,000 people in eight counties already experiencing catastrophic hunger and living in famine-like conditions.

This year, WFP plans to reach six million food-insecure people in South Sudan with food assistance, nutrition support, cash stipends and livelihood opportunities to build the resilience of communities–prioritizing the most vulnerable and conflict-affected women, children, and the elderly.