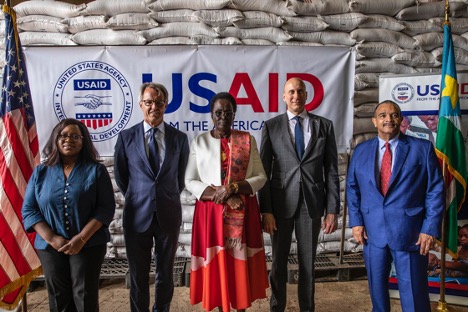 The United State government has contributed $223 million to the United Nations World Food Programme (WFP) to try and address food crisis in South Sudan. This comes as WFP says it targets to reach more than 4.9 million South Sudanese people with food assistance this year, other UN agencies are warning that more than half of the country’s estimated 13 million population is food insecure.

The World Food Programme in April cut food aid to 1.7 million due to what it called a funding shortfall of $426 million.

Mr. William Flens, U.S Embassy Chargé d’Affaires said on Thursday in Juba at the handing over of the contribution to the WFP that  the aid will save lives at a critical time when many people are in need of food assistance.

“This contribution will help avert famine and build resilient in some of the most vulnerable communities in the country.” Said Mr. William.

Rebecca Nyandeng De Mabior, Vice President for Gender and Youth Cluster said the U.S contribution came at a critical time when the country is facing a humanitarian crisis.

“I applaud the U.S government for this generous contribution at a critical time when South Sudan is facing unprecedented humanitarian needs,” Nyandeng said during a handover ceremony.

Mr. Michael Dunford, WFP Region Director for Eastern Africa said that part of the donation will be used to assist the refugees across the region.

“Ukraine supplementary ($106) will allow the WFP to continue to expand our operation that will include supporting refugees from South Sudan, Congo, and from other countries across the region,” Mr. Michael said.

“South Sudan is facing the highest level of life-threatening hunger since the country gained independence 11 years ago,” Mr. Mark said.

Ms. Adeyinka Badejo, UN WFP Acting Country Director said with this support, the WFP will resume support to vulnerable people mostly women and children in the most affected areas across the country.

“We are now in a position to resume assistant to some of these people particularly nutritious food support to women and children,” Ms. Adeyinka said.

The latest Integrated Food Security Phase Classification assessment this year warned that 7.24 million people will face severe acute hunger at the height of the lean season in July, while 1.4 million children will be acutely malnourished.

Unprecedented floods, the impact of COVID-19 on the lives of the poor, and increased conflicts over the last two years have taken a heavy toll on the world’s youngest country, founded 10 years ago this July.