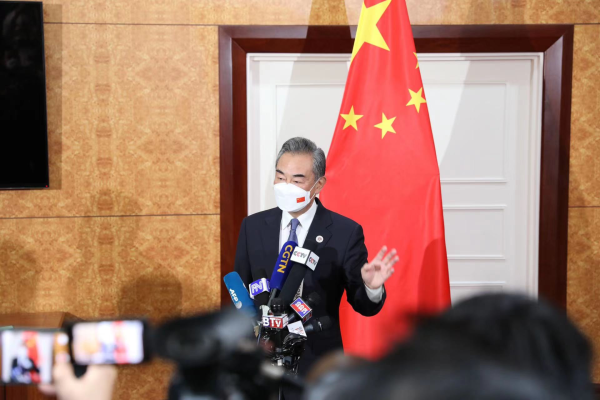 On the afternoon of 5 August 2022 local time, State Councilor and Foreign Minister Wang Yi held a press conference for Chinese and foreign media after attending the series of foreign ministers’ meetings on East Asia cooperation in Phnom Penh.

Wang Yi expressed his readiness to elaborate on China’s position on the Taiwan question. Given that the United States has just spread disinformation and falsehoods, it is even more important for us to clear the air and set the record straight with facts.

Wang Yi pointed out that Speaker of the U.S. House of Representatives Nancy Pelosi, in total disregard of the firm opposition and repeated representations of the Chinese side and with the condonement and even arrangement of the U.S. government, went ahead with the visit to China’s Taiwan region. This reckless move seriously undermined China’s sovereignty, seriously interfered in China’s internal affairs, seriously violated the commitments made by the U.S. side, and seriously jeopardized peace and stability across the Taiwan Strait. It is only natural that China makes a firm response. Our position is justified, reasonable and legal; our measures are firm, strong and measured; and our military exercises are open, transparent and professional. They are consistent with domestic and international laws, as well as international practices. They are aimed at sending a warning to the perpetrator and punishing the “Taiwan independence” forces. We will firmly safeguard China’s sovereignty and territorial integrity, resolutely stop the United States’ attempt to use the Taiwan card to contain China, and firmly shatter the Taiwan authorities’ illusion to pursue Taiwan independence by soliciting the support of the United States. At the same time, we are upholding the international law and the basic norms governing international relations, particularly non-interference in countries’ internal affairs, which is the most important international norm enshrined in the UN Charter. If the principle of non-interference is ignored and discarded, the world will return to the law of the jungle, and the United States will become even more unscrupulous in treating and bullying other countries, especially small and medium-sized countries, from a position of strength. We could not allow that to happen. All countries need to come together to ensure that this will not happen and that humanity will not regress.

Wang Yi said that because of this, more than 100 countries have spoken out, reaffirming their firm commitment to the one-China policy and underscoring their understanding and support of China’s legitimate position. UN Secretary-General António Guterres explicitly stressed that the UN remains committed to the UN General Assembly Resolution 2758. The centerpiece is the one-China principle, namely, there is but one China in the world, the government of the People’s Republic of China is the sole legal government representing the whole of China, and Taiwan is a part of China. This is the unified voice of justice of the international community.

Wang Yi stressed that the U.S. attempt to use the Taiwan card to contain China is only wishful thinking. It will by no means hold back the historical trend of Taiwan’s return to the motherland, nor can it stop the historical process toward the great rejuvenation of the Chinese nation. The “Taiwan independence”  forces’ attempt to seek independence by soliciting U.S. support is nothing but a fantasy, which is doomed to be a dead end, and it will only tighten the noose around their necks.

Wang Yi said, Pelosi’s trip to Taiwan has actually become a farce. By doing so, she has lifted the rock only to drop it on her own feet, because what she did only reinforced the consensus of the international community on the one-China principle. It only makes the Chinese people even more united and determined to advance the process of building a great modern socialist country and to achieve national reunification.

In response to the U.S. argument that a visit to Taiwan by the House Speaker is not without precedence, Wang Yi stressed that the visit of then Speaker Newt Gingrich to Taiwan is a terrible mistake, and the Chinese government vehemently opposed it at the time. The United States has no right or reason to repeat the wrongdoing, and cannot use mistakes in the past as excuses and reasons for repeating them today. Does that mean just because the United States has committed so many wrongdoings in history, it has the right to do them all over again?

Regarding the U.S. allegation that China is changing the status quo in the Taiwan Strait, Wang Yi said that this is an out-and-out lie and groundless accusation. Taiwan has never been a country. There is only one China in the world and both sides of the Taiwan Strait belong to one and the same China. This has been the status quo of Taiwan since ancient times. The China-U.S. Joint Communiqué on the Establishment of Diplomatic Relations in 1978 clearly underlined that the government of the People’s Republic of China is the sole legal government representing the whole of China, and Taiwan is a part of China. This has been the status quo of the Taiwan Strait for decades. However, this status quo has indeed been broken. The saboteurs are not China, but the United States and the separatist forces in Taiwan. In 2000, the United States put the so-called “Taiwan Relations Act” it unilaterally concocted before the three China-U.S. joint communiqués. Isn’t this changing the status quo? Several years ago, the United States took out the once-secretive so-called Six Assurances to Taiwan and made that part of its one-China policy. Isn’t this changing the status quo? Isn’t this hollowing out the one-China policy? Our suggestion is that the U.S. government revisit and take a serious look at the three China-U.S. joint communiqués, so that they will have a clear understanding of what the status quo really is and who is really changing the status quo. The same goes for the Taiwan authorities. Since the Democratic Progressive Party took office, it has been pushing for “incremental Taiwan independence” and “de-sinicization”, and trying to create the false impression of “two Chinas” or “one China, one Taiwan” on various occasions. Isn’t this blatantly changing the status quo? If Mr. Sun Yat-sen were still alive, he would tell Tsai Ing-wen to her face that she has betrayed the ancestors.

Wang Yi called on all parties to stay highly vigilant against the reported U.S. expansion of military deployment in the region. The typical U.S. playbook is to create a problem first, and then use that problem to achieve its own objective. But in front of China, this just won’t work! This is our stern warning to the United States: do not act recklessly or manufacture an even bigger crisis. 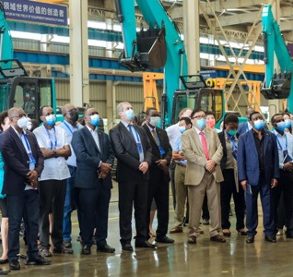 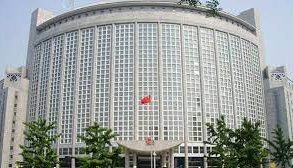 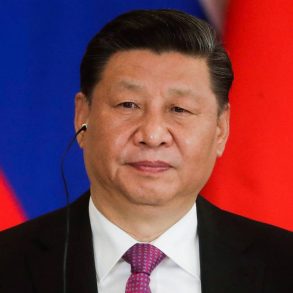