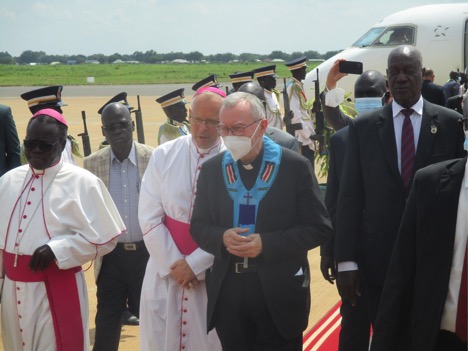 The visiting Vatican Secretary of State Cardinal Pietro Parolin has delivered to the parties in the South Sudan’s transitional government Pope Francis’s message calling upon them to reconcile for the sake of peace.

Parolin arrived in Juba on Tuesday on mission to prepare for the visit of Pope Francis that was called off in June after the Pontiff suffered pain in his knees, prompting the Vatican to postpone his visit to both Democratic Republic of Congo and South Sudan.

“We feel like we are very much in communion with the Holy Father on this day, and all he was concerned about was for reconciliation and peace of South Sudan,” Parolin told journalists at Juba International Airport.

The Pope had initially planned to start his itinerary on 5th till June 8th to the two neighboring countries.

Manyang, welcomed the timely visit of the Vatican Secretary of State.

“Pope Francis will be coming and this is why he has sent ahead his representative and Secretary of State of the Vatican to come to Juba to see the preparation being made ahead of his visit,” Manyang said.

Manyang described the historical visit of the Vatican Secretary as a blessing to the people of South Sudan.

“We wish you a good stay in Juba and in South Sudan and the world will see that South Sudan is in peace and that peace is coming,” he said.