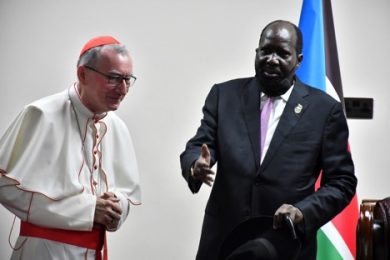 The visiting Secretary of State of the Vatican Cardinal Pietro Parolin has warned South Sudanese leaders of potential relapse into conflict if the peace agreement is not fully implemented.

Parolin arrived in the country on Tuesday with message from Pope Francis meant for the parties in the transitional unity government.

President Salva Kiir and his First Vice President Riek Machar in April 2019 visited the Vatican where Pope Francis urged them to implement the 2018 revitalized peace deal to transition the country toward peace after years of conflict.

“The Holy Father said there will be always difficulty but we have to go forward and solve them with good will just to achieve that unity, peace and reconciliation,” Parolin said.

Parolin is expected to also attend the South Sudan Bishops conference before visiting Unity State to pray with Christians and meet with Catholic religious leaders.

Barnaba Marial Benjamin, the Minister for Presidential Affairs, confirmed that Parolin delivered the message of peace and reconciliation to the President.

“His imminence, the Secretary of State was able to bring the message of his Holy Father the Pope to the President of the Republic and all the people of South Sudan which is unity, peace and reconciliation,” Benjamin said.