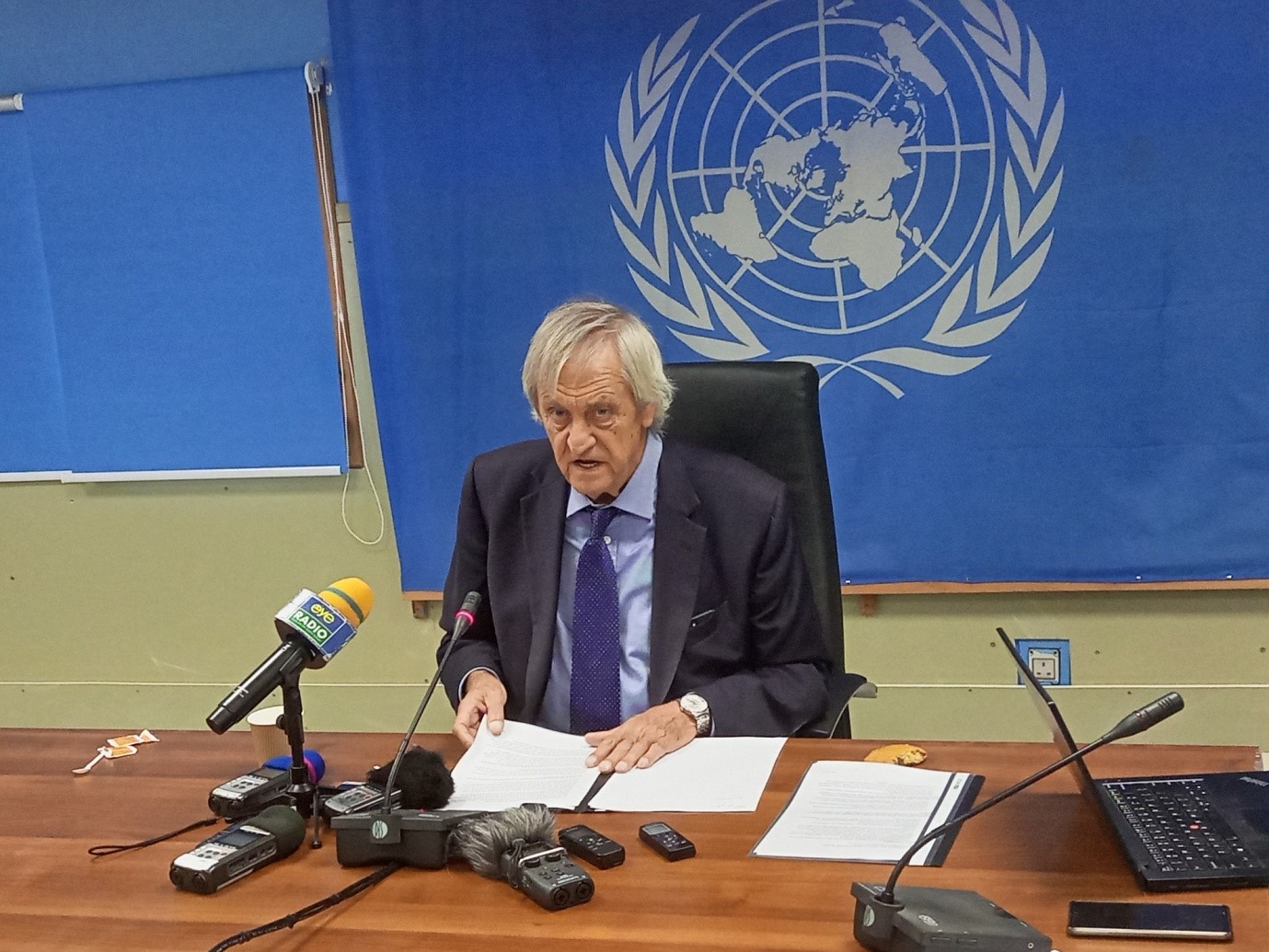 The United Nations Mission in South Sudan(UNMISS) has advised the leadership of South Sudan to organize free and fair elections before the expiry of the extension period.

Nicholas Haysom, the UN Special Representative of the Secretary General in South Sudan made this call while addressing press conference at UNMISS compound in Juba on Wednesday.

The UN boss also revealed that he visited US and had the honor to brief the UN Security Council at the 77th UN general assembly in New York on the prevailing situation in South Sudan.

He added that despite the tangible achievements on the roadmap and the ongoing graduation of the necessary unified forces, the peace process is still not close to an end.

The road map and graduation of unified forces brings new challenges of, accommodation, salary, ranking and deployment of the forces which is now a major concern to the Security Council, Mr.Haysom disclosed.

“We have seen the graduation of a significant number of the necessary unified forces. We believe that the officials promise that the transitional government can begin creating a true national South Sudanese army,” he continued.

Mr.Haydom believes that the graduation of the unified forces can serve the purpose of mitigating inter-communal violence and lifting up the level of citizen protection.

The UNMISS boss further raised concerns over the ongoing violence between the splinter rebel factions of SPLM/A-IO  Kitqwang groups of general Johnson Olony and general Simon Gatwich Dual in parts of Malakal and Mayom County of Unity State.

“Even with these positive developments as I shared with the Security Council, inter-communal conflict continues to fuel repeated circles of violence. Like recently the fighting between SPLM/A-IO opposition forces and the Kitquang also the Agwelek factions have displaced thousands of people within Upper Nile to Jonglei, Unity State and parts of Sudan.”

The UN leader expressed fear that over 14,000 people have been displaced and are now seeking refuge at the Malakal protection of civilian sites adding that UNMISS is working with the state authorities and humanitarian agencies to support sustainable solutions to Malakal crisis.

“It is urgent to prevent overcrowding to control outbreak disease outbreak as well as to maintain peace within the communities that live within the UN Protection of Civilian Sites,” he itemized.

He further condemned violence in Malakal, Mayom in Unity State, Warrap and Abyei which has resulted in deaths, injuries and displacement.

“We condemn the violence in Mayom in Unity State and in Lualbet and most recently Anet in Warrap resulting in casualties and the mass displacement of women and children from the whole village,” said the envoy. The UN in a report says that, 8.9 million people across South Sudan would be food insecure this year and would need humanitarian aids as a result of flooding across the 7 states as well as conflicts in