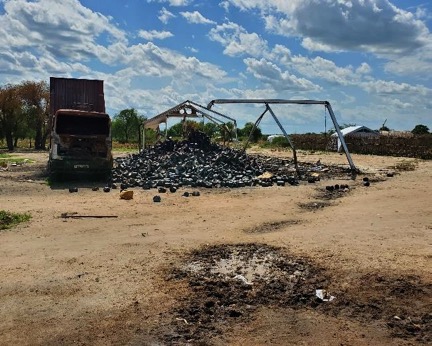 The main United Nations World Food Programme (WFP) operated warehouse in Pibor Administrative Area that held one month’s worth of life-saving food and nutrition supplies for 33,000 people has been looted by armed group.

Over 550 metric tons of food, enough to feed 33,000 food insecure people for one month were looted or destroyed in Gumuruk County of Pibor in the past two weeks of May during the latest bout of violence.

The looted food included cereals, pulses, cooking oil and nutrition supplements for the treatment and prevention of malnutrition in children and women.

“WFP is outraged by the senseless violence and theft of its food assistance in Gumuruk, where people are on the brink of starvation and need every bit of assistance they can get to survive,” said Matthew Hollingworth, the WFP Representative and Country Director in South Sudan.

In May, increased attacks between local groups displaced nearly 9,000 people from Gumuruk and Lekuangole areas to Pibor town.

Hollingworth said the food stolen was intended for the poorest and hungriest families who lost loved ones during communal violence in Greater Jonglei State.

The Conflict ravaged Greater Jonglei for years, leading to mass displacement and loss of both lives and assets, exacerbating the overall humanitarian situation, according to the WPF.

The UN agency disclosed that over 7.24 million people across South Sudan will face food insecurity; nearly 50 percent of them are in Jonglei, Unity and Upper Nile states.

Mr. Hollingworth called on all parties and groups in South Sudan to respect the neutrality of humanitarian workers and installations.

“WFP together with other humanitarian agencies are working to help lessen the suffering of the people of South Sudan in Jonglei and across the country. Such attacks make our work increasingly challenging,” he said.

Violence between armed groups flared up in May across Greater Jonglei, displacing thousands of people and jeopardising the ability of humanitarian agencies to support communities on the brink of famine.