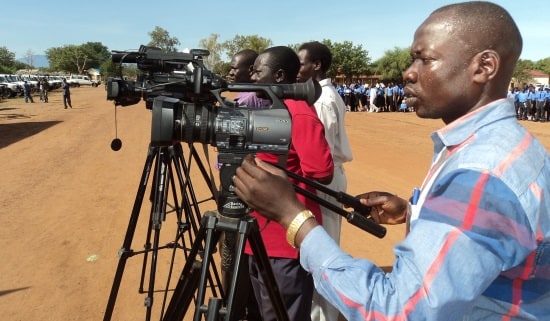 “The implementation of the Revitalized Agreement on the Resolution of Conflict in the Republic of South Sudan is ongoing, democratic processes such as elections are scheduled for the nearest future but you cannot have democracy without fundamental human rights such as freedom of expression.” Said Mrs Pious.

Mrs. Pious made the remarks during a round table discussion on issues of human rights with journalists and activists in Juba at Transit Hotel in Juba on Tuesday.

“As the newest country in the world, you have a very important role to write history by actively talking about the implementation of the 2018 peace deal and other issues like freedom of expression, she added.

On a cautious note, Mrs Pious said that freedom of expression is a progressive right but should not be abused.

Advocate Issa Muzamil of the South Sudan’s Bar Association, said the Transitional Constitution of South Sudan 2011, as amended, guarantees every citizen the right to freedom of expression.

“Every citizen shall have the right to the freedom of expression, reception & dissemination of information, publication and access to the press without prejudice to public order, safety or morals as prescribed by the law”, according to the constitution article 24.

The Union of Journalists of South Sudan (UJOSS) President Patrick Oyet, said politicians, security personnel, and the public each perceive the role of journalist according to their own interest.

“Politicians portray journalists as desperate people who can be influenced by some little South Sudanese Pounds, security personnel think we are foreign spies, who tend to expose secrets which makes the work of security more difficult, members of the academia think that we are lazy with exceptions of the public who think we offer them a platform to express their views”, he said.

The two-day round table discussion is being attended by several activists and journalists with support from UNMISS Human Rights Division, Juba Field office.