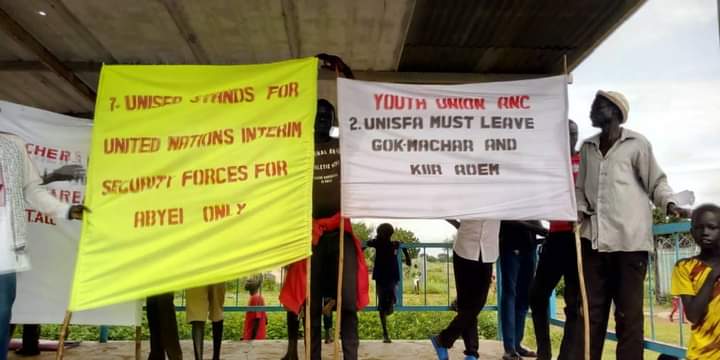 The United Nations Interim Security Force for Abyei has dismissed allegations it was sexually exploiting girls in their areas of operation.

Gok Machar is the base of peacekeeping troops deployed to ensure the safe demilitarized buffer zone – SDBZ – which extends 10 kilometers inland to South Sudan and Sudan from the borderline is respected.

The communities there staged a protest and submitted a petition demanding the peacekeepers to leave within seventy-hours.

The spokesman for the peacekeepers, Daniel Adekera said the allegations were a “calculated attempt to tarnish the image of the mission.”

He said no report has reached the mission concerning sexual exploitation.

“The mission would have dealt decisively with anyone involved if and (any) report of that nature was made to the mission,” Adekera said.

“UNISFA and the UN in general maintain zero tolerance for sexual abuse and exploitation and takes serious disciplinary measures against any peacekeeper, no matter how highly place.”

Adekera wondered why the issue featured in the petition.

“UNISFA views it as a calculated attempt to tarnish the image of the mission at a very critical time when both the mission and authorities in Juba are engaged in resolving the standing issues which border on the mission’s mandate implementation,” he said.

On Friday, communities of Aweil East County, held similar protest and asked peacekeepers at Majok Nyinthiou to vacate the base within seventy-two hours.

The communities threatened to use force to drive UNISFA out of the area should they fail to beat the three-day deadline that started on August 13, 2021.

They accused UNISFA of attempting to annex part of their land to Sudan.

Local youths warned that they will resort to use of force should the mission ignore their peaceful call and stay past the given time.

“Failure to do so, we can act forcefully to let them go.” Marko Amar Deng, a member of the youths told Juba Echo by phone.

Garang Malong Yoor, the paramount chief of Aweil East County warned the peacekeepers to leave before the communities become unruly.

“If they are still here, it will be out of our control, please go away,” Chief Yoor warned.

Abraham Serytarz, the commander of the unit in Majok-Nyinthiou who received the petition, agreed to vacate the base after receiving a directive from his senior command.

“What has happened of course in its context has no relationship with the government and is never related to the government agenda,” Abraham Wol Kom, the Minister of Information of Northern Bahr el Ghazal state told Juba Echo.

“It is an initiative that originated from the youth trying to protest peacefully to demonstrate to the world that something has gone wrong,” he said.