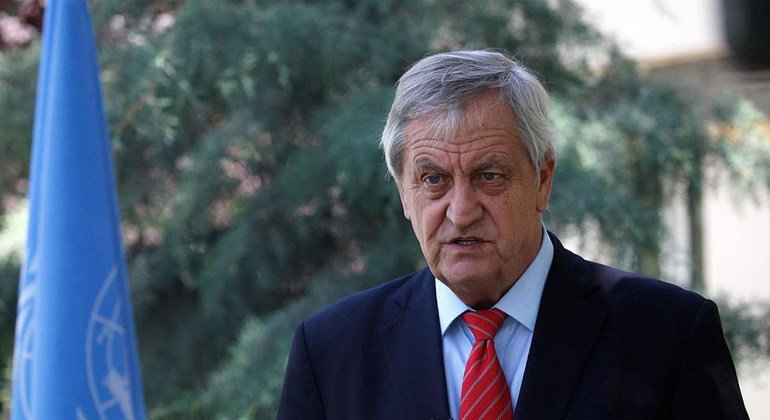 ‘The UN Mission in South Sudan (UNMISS) on Thursday called on the transitional unity government to speed up enactment of key legislation and bodies to prepare the country ahead of the upcoming election in 2024.

Nicholas Haysom, Special Representative of the Secretary General and head of UNMISS, said that the international community in particular needs to see progress if they are going to continue investing politically and financially in the future of the country.

“In that regard, I raise an alert on the slippage of early timelines contained in the Roadmap, and encourage timely efforts to reconstitute: the political parties’ council, the national constitutional review commission, the constitutional drafting committee, and the national elections commission,” said Haysom.

He was speaking during the meeting of the Reconstituted Joint Monitoring Evaluation Commission (RJMEC) – the body charged with monitoring the 2018 revitalized peace deal in Juba.

“Our partners made this clear during the recent visit of the UN Chef de Cabinet and the Under-Secretary-General for Peacekeeping Operations. I join in calls from the parties to engage with a renewed sense of urgency and to treat the benchmarks as critical deadlines,” said Haysom.

Haysom also expressed concern on the security and political tensions, he said are simmering across the country, adding that if not addressed may  intensify as the electoral date nears in December next year.

He called on the government to do more on opening up civic and political space, in addition to inculcating a culture of non-violent debate and dispute resolution in order to address the political and security tensions.

“Sub-national violence continues to drive the growth of humanitarian need in South Sudan, with 8.9 million people in need of assistance. The humanitarian situation is compounded by bigger collective challenges like climate and flooding,” said Haysom.

Haysom welcomed the ongoing first phase graduation of unified forces that has seen more than 40,000 soldiers passed out since August.

He said they are banking on the unified forces to help foster inter-communal harmony in South Sudan.

However, Haysom said that phase two of the graduation must receive adequate logistical and political support to ensure an expeditious process, and to enable these forces to protect civilians in a timely and responsive manner.

The UNMISS chief also implored the government to commence program for disarmament, demobilization and reintegration without delay.

“For our part, UNMISS looks forward to exploring together with the government of national unity how to support the development of the necessary unified forces in line with the country’s vision for security sector transformation that will, see one day, a security apparatus that expresses and reflects national unity and accountability to elected civilian authorities,” said Haysom.