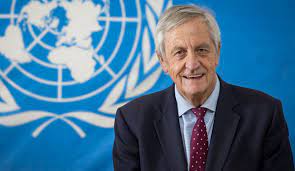 The Special Representative of the Secretary General and head of the United Nations Mission in South Sudan (UNMISS) on Wednesday  refuted claims by the government that it’s radio was being used to promote hate speech in the country.

“At the moment what I found particularly, concerning was the remark by Minister Makuei who is an old friend of mine was that the radio station was being used for hate speech and that we have strongly denied and we must say there is absolutely no basis for it,” Haysom told journalists in Juba.

Makuei accused the radio of promoting hate speech in his speech last week during celebrations of the International Day to End Impunity against Journalists.

Haysom also said the radio is operating legally in the country provision under the Status of Forces Agreement signed between the government and UNMISS in the wake of independence in 2011.

Haysom said they are ongoing constructive discussion with the government over the radio.