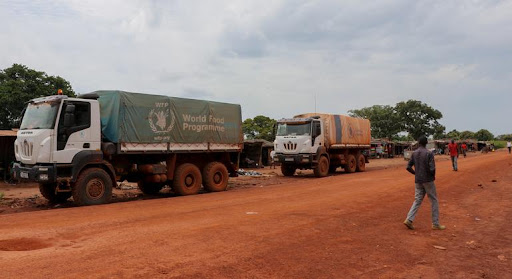 The United Nations World Food Program (WFP) on Friday requested armed factions to cease hostility along Upper Nile and Jonglei routes to enable them reach there with humanitarian aids.

The WFP call surfaced at a time when renewed conflict has displaced thousands of families and left behind an anonymous number of casualties and dead civilians in the aforementioned areas.

The acting Country Director of WFP in South Sudan in a statement issued on Friday said that the cost of inaction will be severe with the very real possibility of famine if they cannot access communities of Jonglei and Upper Nile immediately.

WFP  which depends on river transport to reach rural and remote communities during the rainy season, when roads become inaccessible says that, humanitarian supplies have been prevented from reaching the beneficiaries urgently in need.

“It is completely unacceptable that we have WFP convoys carrying food assistance that can save lives but are simply unable to get through,” Badejo said.

Badejo appealed to the parties involved in conflict to allow humanitarian access into those areas so that all can benefit from international aid.

“All parties to the conflict need to respect international humanitarian law and allow safe passage of WFP and other humanitarian cargo. We are running out of time to prevent people from dying of hunger,” he worried.

He further disclosed that, the WFP has also been forced to hang up its barge movement between Adok and Malakal due to fading security situation.

“Due to corrosion in the security situation along the White Nile, WFP has had to suspend its barge movement between Adok and Malakal as the waterways have become inaccessible, to the detriment of communities in the firing line,” he added.

The WFP head underscored that their repeated attempts to negotiate access to reach communities facing emergency and catastrophic levels of food insecurity have failed.

On 10 September, a WFP river convoy carrying 1,151 metric tons of food meant for communities in Fangak, Canal or Pigi, and Panyikang counties was forced to turn back after renewed clashes between conflicting parties.