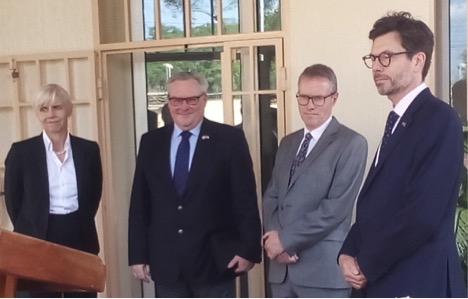 The visiting United Kingdom Envoy for Sudan and South Sudan Robert Fairweather has called on the parties in the transition government to speed up implementation of the extended road map.

He expressed grave concern over the slow progress made in the implementation of the revitalized peace deal.

Fairweather also took note of the rising sub-national violence which he said was derailing efforts to achieve peace and security.

“We have discussed the road map but the focus must be on the destination, a destination without sub-national violence, a destination with human rights, with civic space, with accountability, with peace commitment made and better future for the South Sudanese people,” he said.

The parties to the revitalized peace deal recently agreed to extend the transition period citing delays in completing the graduation and deployment of 83,000 unified forces on time.

“Our message has been to handle conflict in South Sudan by political means and not military means, we have also pointed to some key concerns and worries and that is on humanitarian needs,” said Berrymann.

“We have raised concern on the high level of violence and we have in general stressed the need for deliveries when it comes to implementation of the peace agreement at this critical time of South Sudan’s history,” she added.

Jonny Baxter, the British Ambassador to South Sudan, corroborated Fairweather by demanding for tangible progress on the peace process.

Under the extended roadmap, the country is supposed to hold elections in February 2024 before the end of the transition period in 2025.