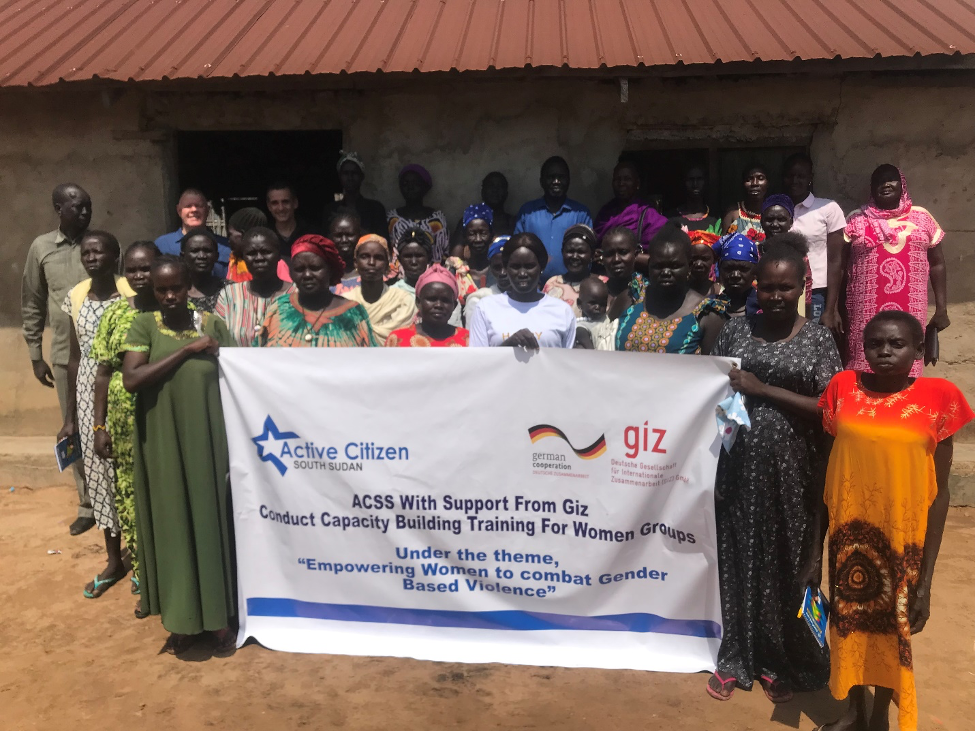 Capacitated by Active Citizen South Sudan (ACSS), a youth-led organization in the country, about ten (10) gender violence-based (GBV) counsellors will now contribute to the societal progress through GBV awareness creation and case management.

On December 10, the organization in partnership with Deutsche Gesellschaft für Internationale Zusammenarbeit (GIZ), a German Cooperation, trained about 10 women on GBV case management.

Gai Makiew Gai, a project officer at ACSS said the trained workforce would embark on awareness raising and rehabilitation of communities to cease the GBV practice.

“They will provide GBV case management and one-on-one emotional support counseling and guidance to GBV survivors and other vulnerable groups,” he explained during an interview in Juba.

“On the other hand, they will also provide information and raise awareness in the community and to female beneficiaries on GBV and the referral pathway,” Gai added.

The training was supported by the German Cooperation, through Deutsche Gesellschaft für Internationale Zusammenarbeit (GIZ).

According to Gai, they imparted knowledge on the counsellors such that they rescue the communities from the rampant GBV events in the areas.

“They were given counselling knowledge and skills to impact the lives of the other women who have gone through traumatized disorders and scenarios as well as boost the people’s understanding on GBV,”

Gai affirmed the counsellors also will offer psychosocial support and options for medical assistance to the community.

Violence against women and girls is a widespread and devastating human rights violation that hinders the fulfillment of women’s and girls’ human rights and development, according to the United Nations.

But in South Sudan, about 65 percent of women will experience some form of sexual and gender-based violence (SGBV) such as child marriage and rape in their lifetime.

Some of these are fueled by the legacy of conflict which the country is still grappling with.

Ajah Ateny, one of the counsellors trained in Gumb promised to challenge the barriers and advocate for an end to GBV in the community.

“Most of us women have been undergoing horrible assaults in our various houses and this is undeniable. Otherwise, we will stand tall to correct the mishap from now on. It is unacceptable and inhumane,” she said.

Ms. Ateny however vowed to work hard so that the GBV practices were eradicated among the communities in Gumbo-Shirikat.

The young woman encouraged the communities to understand the repercussions of the GBV practices and replace the practice with positive behaviors, for instance, respect of human rights.