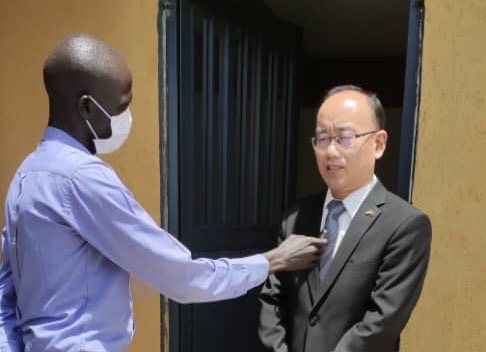 by Mr. MA Wenjun, Charge d’Affaires of the Chinese Embassy in South Sudan

On 2 August, in disregard of China’s strong opposition and serious representations, Speaker of the U.S. House of Representatives Nancy Pelosi visited China’s Taiwan region. This is a serious violation of the one-China principle and the provisions of the three China-U.S. joint communiqués. It has a severe impact on the political foundation of China-U.S. relations, and seriously infringes upon China’s sovereignty and territorial integrity. It gravely undermines peace and stability across the Taiwan Strait, and sends a seriously wrong signal to the separatist forces for “Taiwan independence”. The Taiwan question is purely China’s internal affair that brooks no foreign interference. The Chinese Ministry of Foreign Affairs has issued an official statement on this, and I would like to further introduce the relevant facts and China’s position on the Taiwan question to friends from all walks of life in South Sudan.

First, Taiwan has been an inseparable part of China’s territory since ancient times, the one-China principle is the broad consensus of the international community. The Chinese government set up administrative institutions in Taiwan as early as the 12th century. After the First Sino-Japanese War of 1894-95, through which Japan sought to colonize China, the court of the Qing Dynasty (1644-1911) was forced to sign the Treaty of Shimonoseki and ceded Taiwan to Japan. This was followed by persistent efforts of the Taiwan compatriots to fight Japanese colonialists until the victory of the Chinese people’s War of Resistance Against Japanese Aggression and World Anti-Fascist War brought Taiwan back to its motherland. On Dec 1, 1943, China, the United States and the United Kingdom signed the Cairo Declaration, which stipulates that all the territories that Japan had stolen from the Chinese, including Taiwan, were to be returned to China. On July 26, 1945, China, the US and the UK signed the Potsdam Declaration, which reiterated that “the terms of the Cairo Declaration shall be carried out.” On Aug 15, 1945, Japan surrendered and acknowledged the Potsdam Declaration, and Taiwan was returned to Chinese sovereignty. The current state of separation between the two sides of the Taiwan Strait is a result of the ensuing civil war in China and the interference of the US. In October 1971, with the support of developing countries including many African countries, the 26th session of the United Nations General Assembly adopted Resolution 2758, restoring the seat and all lawful rights of the People’s Republic of China at the UN. It has been an agreement of the international community that there is but one China in the world; Taiwan is part of China; and the government of the People’s Republic of China is the sole legal government representing the whole of China. The one-China principle is the political foundation of the bilateral relationships between China and 181 countries (including 53 African countries) that have diplomatic relations with China.

Second, the US has also made a serious commitment to the one-China principle, but it betrayed its word and broke its commitment, distorted, obscured and hollowed out the one-China policy, raised tension in the Taiwan Strait for its selfish interests. This is a highly dangerous trick. The Taiwan question is the most important and most sensitive matter in China-US relations, and the centerpiece is the one-China principle. In the China-US joint communiqués, it has been acknowledged that there is but one China, Taiwan is part of China, and the government of the People’s Republic of China is the sole legal government of China. The US said it would only maintain cultural, commercial and other unofficial relations with Taiwan. It pledged not to carry out a long-term policy of arms sales to Taiwan and intended gradually to reduce its arms sales, leading, over a period of time, to a final resolution. However, the US government, while claiming that its one-China policy has not changed, that it does not support “Taiwan independence” and does not want conflict or confrontation with China, it considers Taiwan as a “strategic node” in the first island chain, trying to build Taiwan into “an unsinkable aircraft carrier” to contain China by means of the Taiwan question. It puts its Taiwan Relations Act and the Six Assurances, something that only reflects its own will, above the three China-US joint communiqués, which are the common understanding between two countries. This has hollowed out the one-China policy and violated the basic norms governing international relations. The US side substantially upgrades its official relations with Taiwan and sends senior officials to the island, which breaks through its commitment of only maintaining unofficial relations with Taiwan. It constantly incited the tension across the Taiwan Strait, took the opportunity to sell sophisticated weaponry totaling more than 70 billion dollars to Taiwan, and used Taiwan as a cash machine, making its own military-industrial complex earn large amount of money. US actions will embolden separatists and turn the Taiwan Strait into a dangerous powder keg. Facts have fully proved that the United States has become the “biggest destroyer” of peace across the Taiwan Strait and for regional stability.

As a line of ancient Chinese poem goes, “Mountains could not stop the river from flowing into the sea.” Pelosi’s visit to Taiwan is an ugly political stunt orchestrated by supportless politicians out of political calculation, which will not change the historical and legal facts that Taiwan is part of China, and will not stop the reunification course of China. The reality will be as President Xi Jinping said, no one should underestimate the resolve, the will, and the ability of the Chinese people to defend our national sovereignty and territorial integrity, and the complete reunification of our country will be and can be realized.