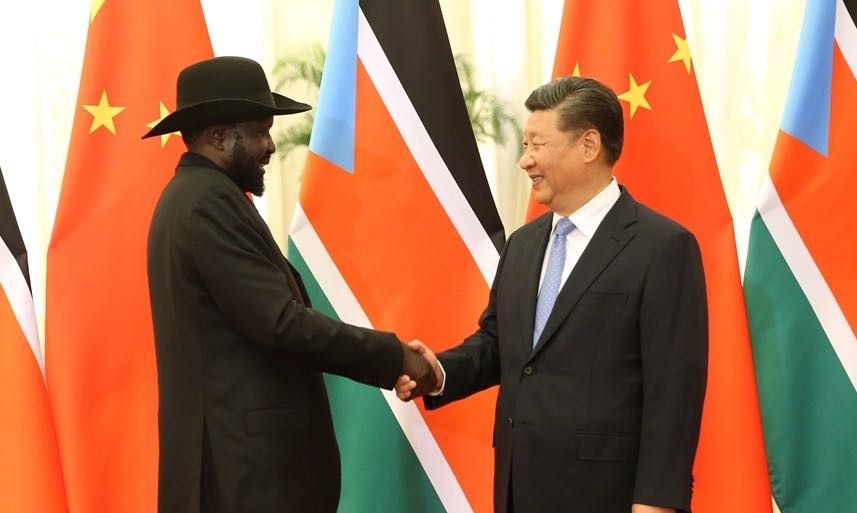 Mr. Ma Peimin is a China Media Group reporter based in East Africa since 2019. Through his perspective, we trace the development of the growing China-South Sudan relations in his eyes.

The Communist Party of China and World Political Parties Summit was held in July 2021. Themed “For the People’s Wellbeing: the Responsibility of Political Parties,” the summit is a solid platform to strengthen exchanges and mutual learning of experience in governance between the CPC and world political parties.

During his speech at the summit, President Salva Kiir congratulated the CPC on its 100th anniversary and praised China’s historic achievements in various fields in the past decade. Kiir said development achievements and important contributions to the cause of human progress indicate that political parties should shoulder the responsibility of seeking happiness for the people, and South Sudan is willing to work with the CPC to jointly build a better and happier world.

Last year marked the 10th anniversary of the establishment of diplomatic relations between China and South Sudan. In his congratulatory message to President Kiir, President Xi said bilateral cooperation in various fields has been fruitful. The two sides have always supported each other firmly on issues concerning each other’s core interests and major concerns.

Kiir said South Sudan has received tangible help from China in economic and social development, in the domestic peace process, and in the fight against Covid-19, and that South Sudan looks forward to continuously consolidating the high-level relations and benefiting the two peoples.

On June 30 this year, the handover ceremony of a donation of anti-epidemic materials for refugee camps in South Sudan funded by the Chinese government was held in Juba. The COVID-19 pandemic has caused an unprecedented crisis to the refugee community in South Sudan, and it has also brought serious challenges to refugee protection work. In the face of the epidemic of the century and the weak sanitary conditions in South Sudan, China acted immediately by donating a batch of anti-epidemic materials to South Sudan in cooperation with the United Nations High Commissioner for Refugees (UNHCR) to help the front-line medical staff and refugees in the camps to curb the spread of the virus.

The project is funded by the China South-South Cooperation Assistance Fund and implemented by the UNHCR. The Chinese government attaches great importance to the refugee issue, is committed to maintaining world peace and development, actively participates in humanitarian assistance, and advocates resolving disputes through dialogue and consultation to eliminate the root causes of situations leading to the large numbers of refugees.

On September 29, Ma Qiang, the Chinese Ambassador to South Sudan, accompanied South Sudanese Vice President Taban Deng Gai to inspect the first section of the Juba-Rumbek highway project. They visited the completed bridges along the highway, and had in-depth exchanges with the local people at the end of the road section to learn more about the convenience people now enjoy after the opening of the road to traffic.

The Juba-Rumbek highway is a key project under the framework of the “Belt and Road Initiative.” It was jointly built by China and South Sudan quality. The contractor, Shandong Expressway, ensured the construction of the road met the highest standards and quality.

With the support of the South Sudan Road and Bridge Department and other relevant agencies, the first section of the highway was successfully completed after experiencing various difficulties. The road has and will continue to improve the lives of the surrounding people.

By the end of 2021, Chinese enterprises had invested a total of US$43.08 billion in overseas economic and trade cooperation parks built in countries along the route, creating 346,000 local jobs. According to reports, China has signed more than 200 cooperation documents on the Belt and Road Initiative with 149 countries and 32 international organizations.

In 2012, the second year of South Sudan’s independence, China started sending medical teams to the country. Over the decade, more than 100 Chinese medical staff have been in South Sudan to perform more than 1,000 surgeries of various types, conduct 971 gastroscopy examinations, and donate urgently needed medical equipment and medicines to Juba Teaching Hospital every year.    The Chinese medical team set up an electronic gastroscope room, a cervical screening center and a remote imaging diagnosis center at the Juba Teaching Hospital to train medical staff in South Sudan. At the same time, the Chinese medical team also taught anesthesiology at the Juba Health Research Institute, and trained the students of the School of Nurses and Midwives.

President Xi pointed out in the report he delivered at the opening of the 20th National Congress that China has always adhered to its foreign policy of maintaining world peace and promoting common development, and is committed to boosting the building of a community with a shared future for mankind.

In fact, no single country can solve the issues and challenges that the world faces today. All countries should unite and cooperate for mutual benefit and common development. China’s all-round achievements in the past ten years are obvious to all. The country is willing to share what it has gained and bring new opportunities to the world, especially developing countries like South Sudan.